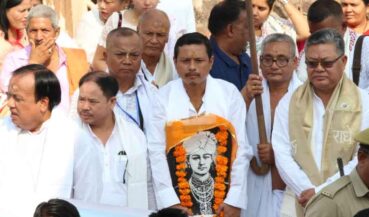 Imphal, October 02 2020: The 222nd death anniversary of Rajarshi Bhagyachandra will be observed for two days at the Shree Shree Govindaji temple in Imphal and Shree Shree Gopinath temple at Ningthoukhong in Bishnupur district on October 19 and 20 .

Speaking at a press meet held at the office of Rajarshi Bhagyachandra Cultural Foundation, Manipur at Sega Road Thouda Bhabok Leikai today, spokesperson Takhellambam Irabot said since the inception of the foundation in 2013, it has been observing the day at Radhakund, Dwarikanath and other places.

A committee has been formed under the chairmanship of Rajya Sabha MP Meidingu Leishemba Sanajaoba to organise the event.

The committee will make sure that the COVID-19 SOP issued by the Government is strictly followed, he said.

Takhellambam Irabot who is also the advisor of the organising committee of the event further said that the programme will start from the early morning of October 19 at Shree Shree Govindaji temple with Puja Arambha, Bhagavad Path.