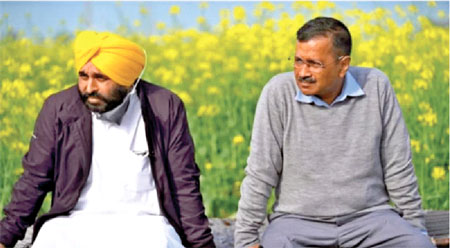 The Aam Aadmi Party (AAP) was floated on the backdrop of Anna Hazare’s now-famous agitation against corruption and demanding accountability in public places.

But the party’s track record politically and otherwise has always been in question. At the instance of Arvind Kejriwal, the AAP leaders and workers had turned hostile to Prashant Bhushan and Yogendra Yadav. Kejriwal himself shared the stage with tainted leaders like Lalu Prasad and questions about transparency have been raised more than once.

But in Punjab – hardly a few months or rather weeks – state health minister Vijay Singla has been sacked on a charge of corruption and arrested. Singla has of course denied the charge that he ever demanded 2 per cent cuts etc.

Now it also came to light that the ousted Health Minister, Dr Singla, functioned through a “group of four”, comprising his nephew, a dentist friend and two acquaintances from Mansa.

Reports also say that besides the henchmen of the sacked Minister, the roles of two other cabinet ministers and three MLAs were under scanner on corruption charges.

It has also been reported that Singla’s associates Vishal, a pesticide dealer, and Jogesh Kumar, a brick-kiln owner, both of Mansa were ‘handling transfers’. Singla had allegedly told officials not to clear any transfer without his approval.

Even a minister’s relative was involved in the matters showing AAP hardly had differences with parties such as Trinamool or the Congress to promote and keep family persons in the loop.

The Aam Aadmi Party has also asked both to submit the names of the ministers facing corruption charges so that they can be booked like Singla.

The AAP leadership also gives the impression that it wants to eradicate corruption.

Punjab CM Bhagwant Mann and AAP chief Kejriwal reiterated the party’s “zero tolerance for corruption” policy. But they have deliberately or otherwise failed to mention the controversial sacking of the then AAP state convener Sucha Singh Chhotepur in 2017 election season after a video appeared showing Chhotepur accepting money from a party worker allegedly for a party ticket.

AAP’s claims on the corruption crusade were forgotten long back. The party is more sincere about vote-bank politics like other mainstream parties.

It seeks people’s mandate in the name of populism such as free electricity and drinking water.

In Delhi, BJP city unit chief Adesh Gupta alleges that the AAP was indulging in corruption in Delhi Jal Board, Delhi Transport Corporation and other departments.

One Delhi minister was probed lately over corruption charges, but CBI has now filed a closure report.

“An atmosphere was created in Delhi as if Arvind Kejriwal was trying to fight a big fight against corruption. You will be surprised to know that the anti-corruption branch (ACB) officers said there is no record of calls received on 1031, the anti-corruption helpline,” BJP national spokesperson Sambit Patra said last month.