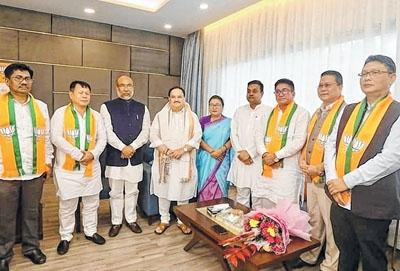 Imphal, September 04 2022: Days after Bihar chief minister Nitish Kumar decided to switch side in an act many perceived as JD(U) ditching BJP in Bihar,  five Janata Dal (United) MLAs decided to merge withBJP In Manipur. 5 former JD(U) MLAs formally joined the BJP in the presence of party president JP Nadda at the national capital on Sunday.

Janata Dal-United had won six seats in the 60-member State Assembly in the recently held Assembly elections while the BJP secured a majority with 32 seats.

Out of the six JD(U) MLAs, only one MLA, Md Abdul Nasir of Lilong AC has been left. It is speculated that he too might join the saffron party.

In a Facebook post, JP Nadda said, “I welcome the five JDU MLAs from Manipur into the BJP family.

The reception ceremony of the five MLAs was also attended by BJP State unit president A Sarda Devi and Chief Minister N Biren Singh. Janata Dal(U) and Congress have announced that they will move a Court regarding the merger of five Janata Dal(U) MLAs with the ruling BJP as it was ‘unconstitutional’ .

In a statement issued on Friday, the Manipur Legislative Assembly Secretariat said that the merger of five JD (U) MLAs with the BJP under the tenth schedule of the Constitution has been accepted.