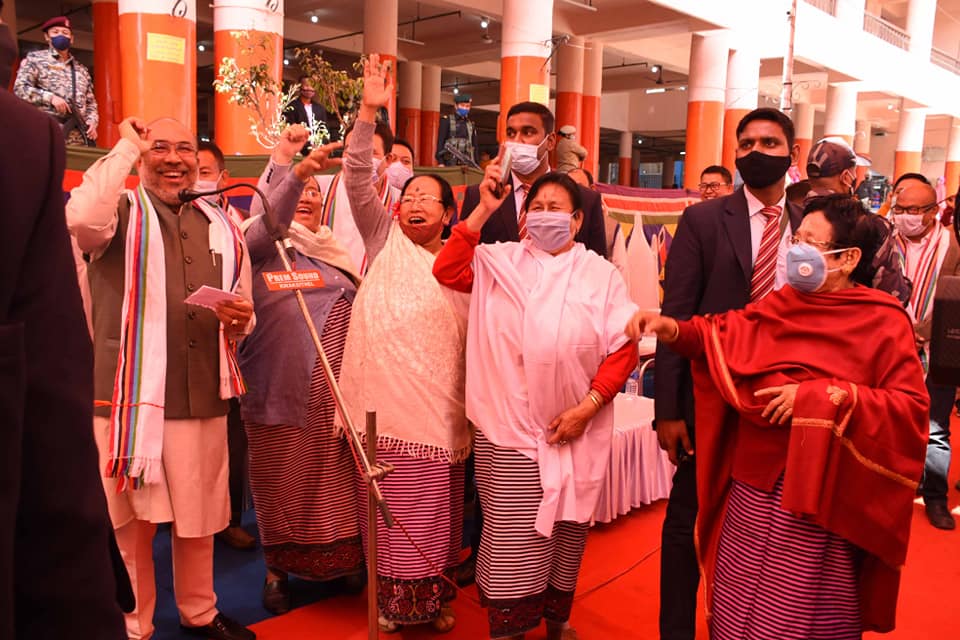 He also announced that women vendors of Ima Markets would be exempted from vendor license fee for the year. The Government took the decision considering the hardship faced by the women vendors during the COVID-19 pandemic as the markets remained closed for nearly a year, he added.

The markets had remained closed till date since 21st March last year as precautionary measures amid the outbreak of the pandemic.

He further stated the Government had been successful in containing the spread of COVID-19 and saving the precious life of the people mainly due the contribution and responsible decision of women vendors to close the markets. Stating that the pandemic had made humans learn a lesson about the importance of preserving the nature, the Chief Minister called for a change of our mindset and move towards a clean environment to prevent mankind from such other diseases in future.

He also urged the officials of MAHUD Department to supply garbage bags to women vendors so that garbage and spoiled vegetables could be put to the same and collected for proper disposal. Such conduct would be helpful in maintaining cleanliness in and around the market places and prevent the women vendors from certain diseases, he added. Shri N. Biren asked the women vendors to allot a day to the Government once in a month for maintenance and cleaning work of the market areas. He further added that construction work on roads along the markets would be completed soon. He also appealed to the women vendors to bring up their grievances to the concerned authority before resorting to any strikes or rallies. Urging the street vendors not to sit on roads blocking the passage way while selling their products, he stated that the Government would sort out a provision to accommodate them. Appreciating the early initiative and concern shown by Prime Minister Shri Narendra Modi, the Chief Minister stated that various schemes had been taken up under the supervision of the Prime Minister during the countrywide lockdown to ease the adversities faced by the people. He also appreciated the Ministers, MLAs, Doctors and other frontline workers for their timely efforts and contributions made to contain the spread of the virus and save people’s lives.

He also informed that a cancer hospital would be constructed in the State soon and an amount of 10 crore rupees had also been allocated in the budget as Chief Minister’s Cancer Relief Fund.