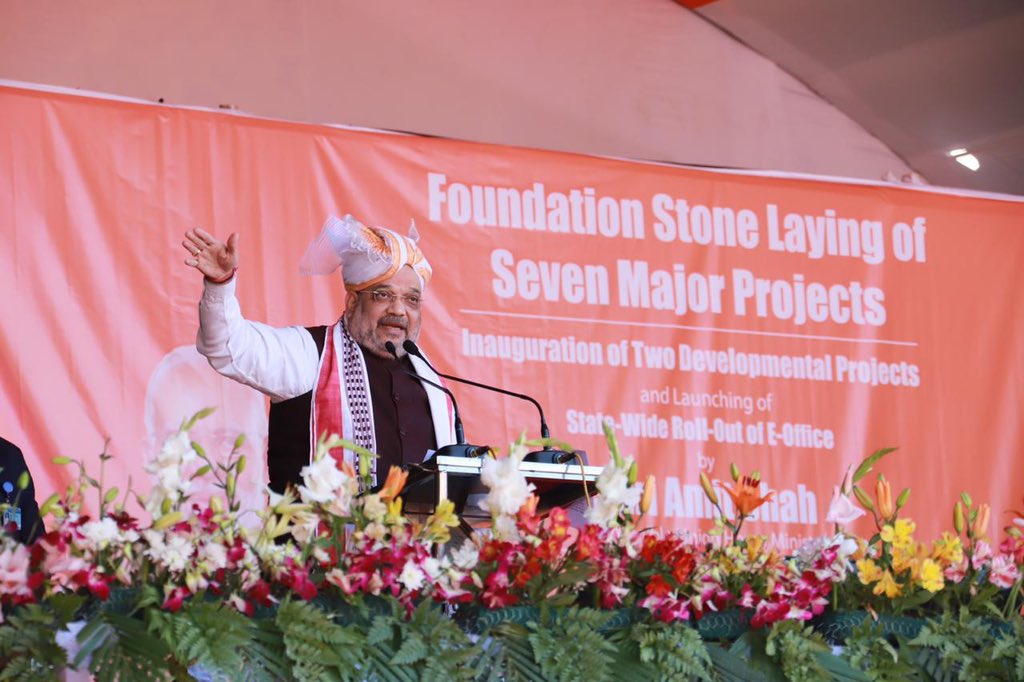 Amit Shah was speaking at the inauguration and foundation laying ceremony of several projects at Hapta Kangjeibung, Imphal today.

The Union Home Minister landed here today to a rousing welcome and was accompanied by Union Minister of State for DoNER Dr Jitendra Singh.

Key projects that were unveiled are Thoubal Multipurpose Project constructed at an estimated cost of Rs 1998.99 crore and Bishnupur-Tupul-Thoubal-Kasom Khullen road worth Rs 475.68 crore to the people of Manipur. The e-office was also rolled out across the state.

Addressing the gathering, Amit Shah said that prosperity and development of the North Eastern region is Central Government’s topmost priority and the foundation stones laid for various development projects in Imphal today reflect the Centre’s unwavering commitment towards the people of Manipur.

He said that Manipur is moving on the path of development under the leadership of Prime Minister Narendra Modi and Chief Minister N Biren Singh.

Projects for which foundation stones were laid today would bring equal development in the State bridging the gap between hill and valley regions, he added.

Amit Shah said that after the BJP-led Government came to power at the Centre in 2014, the Government under Prime Minister Modi decided to send one Union Minister to the North Eastern region every half month.

Prime Minister Modi himself has visited the North East region about 40 times since 2014 with the aim of bringing development in the region.

The Prime Minister believes that developing India is not possible without developing the North East region, he said adding that there has not been a single leader who loves and cares for North East people like Modi.

The dream (ILP) of the people was fulfilled as Prime Minister Modi was concerned that non-implementation of the ILP in Manipur would be unfair to the people.

The North East region had many insurgencies and it had stalled development works, but now most of them have returned to the mainstream and are engaged in talks with the Government.

To bring peace and development in the region, the Government is working on to settle the Bru issue.

The Government has signed the Bodo Peace Accord with Assam Government and Bodo stakeholders, he said.

Regarding the projects being taken up in Manipur, he said that the Thoubal Multipurpose Project was started during the time of Atal Behari Vajpayee as Prime Minister.

After Congress came to power at that time, the project was stalled without much work till 2014.The Chief Minister of the time did not apprise the Centre of the project and when the issue was taken up, there was none in the Centre to hear the appraisal.

It was in 2016 under Prime Minister Modi, that work with an estimated cost of Rs 462 started.

Today, the project is irrigating more than 35,104 hectares of agricultural land, he said.

He further stated that many projects which had been lying dormant are finally being implemented under Prime Minister Narendra Modi.

He stated that the IT Special Economic Zone (IT-SEZ), for which the foundation stone was laid today would take the State to a new platform empowering its youth.

The Gross Domestic Product of Manipur would also increase by around Rs 4600 crore once the construction of IT-SEZ completes and starts functioning, he said.

Regarding the Churachandpur Medical College, he said that the college would have the capacity to produce 100 doctors every year and reinforce the State’s healthcare capacity.

He also urged Chief Minister N Biren Singh to look into establishing a college for forensic, sciences in the State in collaboration with the Institute of Forensic Science for the benefit of the students from the North East region.

The Central Government would provide assistance in establishing the college, he said.

Amit Shah also lauded N Biren Singh for his tireless contributions in making Manipur free of bandhs and blockades and bringing her to the path of development with various policies and projects.

Only about 6 percent of the population in Manipur had access to clean drinking water.

But now under Chief Minister N Biren Singh, the percentage of people having access to clean drinking water has increased by 30 per cent.

Tourism industry is improving and as compared to the past the percentage of foreign tourists visiting Manipur has increased by 200 percent.

The Startup scheme has benefited more than 1186 youths.

Pertaining to the demands put forward by the CSOs, Amit Shah said that the Centre acknowledges their demands and would honour their trust.

Growth in sectors like health, education among others are the key to development, he said and appealed to the civil society organisations of the State to include development related issues in their demands.

Chief Minister N Biren Singh said that the day is memorable as Union Home Minister Amit Shah, who had played a key role in the implementation of the Inner Line Permit (ILP) System in Manipur, was visiting the State.

The Government together with the people made different attempts to introduce a mechanism to protect the indigenous people of the State.

Different Bills were passed by the State Legislative Assembly on different occasions, but people could not realise their dream for many years.

However, the Central Government under the leadership of Prime Minister Narendra Modi took the decision of enforcing ILPS in Manipur giving tremendous joy to the people.

He added that “Amit Shah is a man of action who usually talks less”.

Dr Jitendra Singh recalled that Narendra Modi soon after he was sworn in as the Prime Minister had declared that India would not develop until the North East develops.

The various developmental activities taken up by the Government with Chief Minister N Biren Singh taking active roles in Manipur is testimony of what the Prime Minister had said six years ago, said Dr Jitendra.

Claiming that Narendra Modi had visited the North East more than 40 times in the past six years as Prime Minister, Dr Jitendra asserted that this had never happened in the past.

He said that the Hill Area Development Programme (HADP) was introduced to accelerate development of the North East region.

He said that works for connecting all the North East States with double gauge railway tracks are underway.

Special Road Development Programme has been introduced to enhance road connectivity and efforts are being made to improve inland waterways as well, he said.

The region has become a role model for the entire country in COVID-19 management.

Post Covid, he said, the region would also become a role model for others in various other sectors as well.

Large number of people cheered and welcomed the Union Minister on the roadside from the airport to Hapta Kangjeibung.

On the other hand, Deputy Chief Minister Y Joykumar felicitated Dr Jitendra Singh by presenting him a bouquet, Lengyan and a painting of Kangla from RKCS Art Gallery. Women of Ima Keithel also presented gifts to Amit Shah and Dr Jitendra Singh.