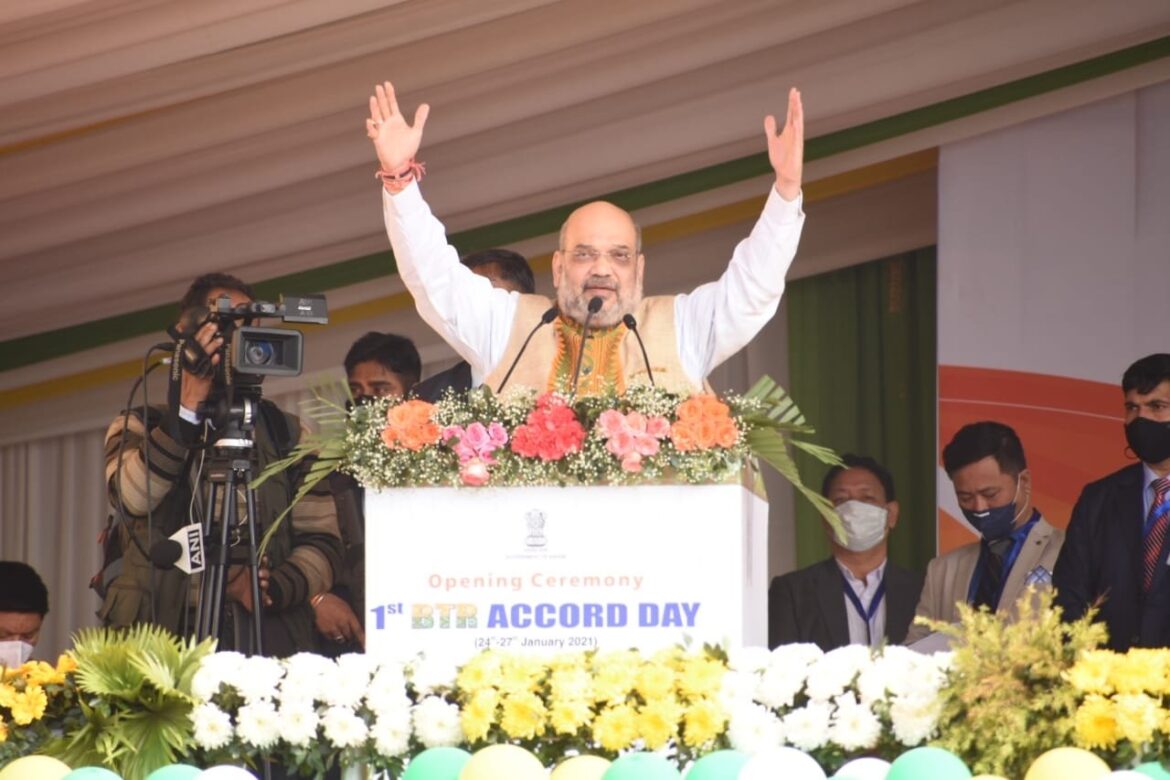 Guwahati: Union home minister Amit Shah on Sunday asserted that the Bodoland Territorial Region (BTR) Accord marks the beginning of end of insurgency in Northeast, Jammu and Kashmir.

Union Home Minister Amit Shah was addressing a gathering in western Assam’s Kokrajhar, bordering West Bengal, Shah said that with the repeal of Article 370, violence has been tamed in Jammu and Kashmir while with the historic Bodo Peace Accord the violent phase has ended in the Bodo Territorial Region (BTR) comprising four districts of Kokrajhar, Chirang, Baksa and Udalguri.

“With absolutely no violence and a huge number of people exercised their franchise both in the District Development Council polls in Jammu and Kashmir (in November) and in the Assam’s Bodoland Territorial Council (BTC) polls (in early December),” he said.

Shah said that the BTC polls’ success is a semi-final and the BJP would win comfortably in the final match — Assam Assembly elections, likely to be held in April-May.

“Only BJP, under the leadership of Narendra Modi, can make Assam corruption-free, terrorism-free and pollution-free,” the minister said.

Speaking at the public rally to mark the first anniversary of signing the BTR Accord, the minister said that due to efforts of Prime Minister Narendra Modi, a new era of development and peace has prevailed in BTR.

Shah said, “PM Modi had initiated the process to end insurgency in the Northeast by signing the Bodo peace Accord. Efforts were made for settlement for Bru-Reang issue and 700 members of 8 armed groups laid down arms.”

The minister also said that once the region was known for terror and bloodshed, this area will now become the most developed area of the state.

Shah also asserted that Prime Minister Narendra Modi and BJP are committed to fulfill all clauses of the BTR Accord, inked a year ago.

“I have come here to iterate that PM Modi and the BJP are committed to fulfill all clauses of the BTR Accord, which will pave the way for peace and development in the region,” he further stated.

Coming down heavily on the Congress party, Shah said that the grand old party had signed many agreements with different militant outfits in the past, but failed to keep the promises it made.

During his address, he also said that political rights, cultural rights and language of all communities of Assam are secure under the BJP government.

“Several measures have been taken to protect, preserve and promote the rich culture, language and heritage of all communities of the state,” the Union minister said.

The BTR Accord, designed to usher in peace in the Bodoland Territorial Areas District (BTAD), was signed on January 27, last year, by the Centre, the Assam government, all four factions of the National Democratic Front of Bodoland and the then Bodoland Territorial Council chief Hagrama Mohilary.