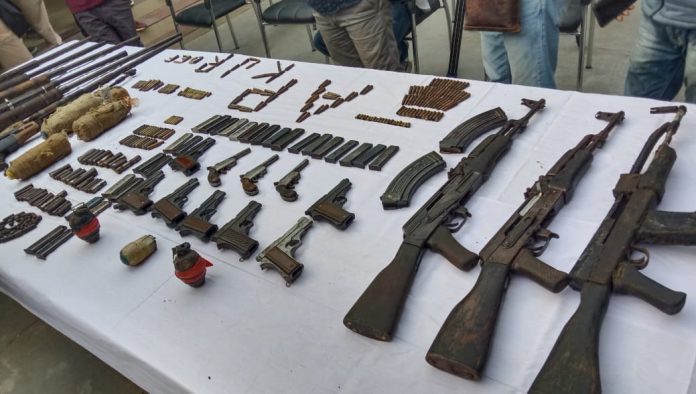 GUWAHATI: Assam Police in a joint operation with Army, SSB and CRPF have recovered a huge cache of arms and ammunition, explosives from Akshiguri in Ripu Reserve Forest of Kokrajhar district on Saturday, some 48 hours before the Bodoland Territorial Council (BTC) polls of Monday.

The recoveries included firearms both country made and sophisticated, explosives, grenades, over 160 rounds of ammunition as well as petrol bombs. No arrests were made so far in connection with the case.

The Kokrajhar superintendent of police (SP), Rakesh Roushan told media that the successful operation was a part of the state police’s crackdown on illegal arms in BTC and to ensure a free and fair poll.

“Anyone trying to disturb the peace and law and order situation will be dealt with stringent actions,” he said.

The SP added that state police have already decided to deploy armed forces in every polling station in the district.

Earlier, Assam Police director-general Bhaskar Jyoti Mahanta said that at least 30 additional companies of forces have been deployed in BTC areas owing to its past records of violence during elections.

Arms and ammunition were being continuously recovered from various parts of BTC areas over the last couple of days.