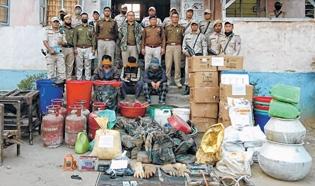 Manipur Police sources stated that the raid was a culmination of their intense surveillance for about one month. “The raid was a part of the State Govt’s efforts on ‘War on Drugs” campaign Churachandpur district SP Ms Amrita Sinha said, reports the DIO of Churachandpur in a statement.

The SDC of Churachandpur district, Jangminlen Lupho also accompanied the police team during the raid in his capacity as an executive magistrate.

Several items used for manufacturing and processing the illicit brown sugar including Ammonium Chloride, Di-Ammomium Phosphate, Lime and 5.3 kg of Opium, besides other items were also seized during the raid.

Later, a case under ND&PS Act has been registered for further investigation.