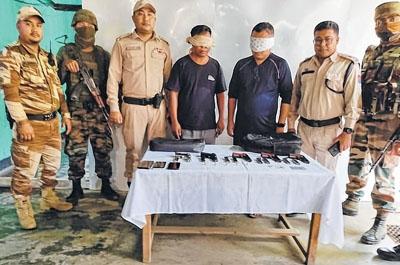 Addressing the media at Bishnupur today, Additional SP (Ops), Bishnupur said that the combined team carried out intensified checking at Torbung areas on receiving specific inputs about transportation of arms from Churachandpur towards Moirang side today.

Team intercepted one Maruti Dzire with two occupants and they were detained for verification during the drive. The arrested persons was identified as T Kamminthang (42) of Tongciin, Tonzang, Myanmar staying at Lungthul village, Churachandpur and Thangbiaklal Ngaihte (35), of Nehru Marg, Churachandpur .

The combined team found the arms and ammunition on checking the car, he said. They have been handed over to Moirang police station along with the seized items.

Woman arrested with Opium from Leimatak in Bishnupur district of Manipur