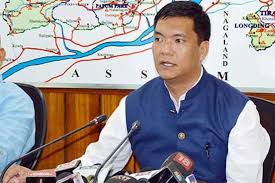 The state government has issued an official notification in this regard. As per the notification issued by the Department of Cabinet Affairs, deputy chief minister Chowna Mein, who holds the finance and investment, power and non-conventional energy resources portfolios, has been given additional charge of tax and excise, state lotteries and statistics.

PHED minister Wangki Lowang has been given the additional charge of information technology department while RWD minister Honchun Ngandam entrusted with the science and technology portfolio.

Urban Development minister Kamlung Mossang has been given additional charge of geology and mining while home minister Bamang Felix with IPR and printing departments.

Textile and handicrafts minister Tumke Bagra has been given the additional charge of labour and employment, cooperation while sports minister Mama Natung entrusted with environment and forests.

These all portfolios were previously held by chief minister Pema Khandu.

Expressing his conviction towards a decentralised governance and decentralisation of power that would pave way to unprecedented development, Khandu exuded confidence that his colleagues will work tirelessly in public interest.

Arunachal Pradesh CM Pema Khandu had made 22 MLAs the advisors to the different Ministers.