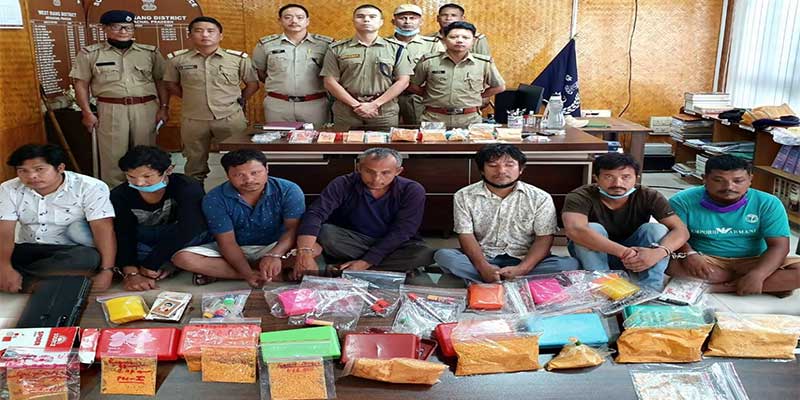 Aalo: The West Siang police have busted an inter-state drug racket with the arrest of seven people and seized Heroin of worth of Rs 25 lakh, said a official press statement of West Siang Police.

Per the statement ” the ANTI DRUG SQUAD (ADS) of West Siang Police, formed by SP West Siang, seized heroin worth Rs 25 lakhs and arrested as many as 7 peddlers from Aalo in West Siang, Rottung in Siang district and from Jonai in Assam in last few days. The ADS, West Siang Police has been working on this inter-state drug racket since last several months on the basis of electronic and field surveillance of suspects.

On receipt of a  tip off on 15.09.2020, the ADS led by Inspr. Yomken Riram, comprising SI C. Yanchang, I/O, Cts. S.K.Singh, Tumbom Bagra, A. Ansari, A.K. Yadav and T. Hemi set out on a hot pursuit of one suspect Mogum Loyi aka Shakal of Aalo who was one of the major stockists of drugs at Aalo.

He was intercepted at Rottung area in Siang district while returning from Assam with the procured contraband substance in a car bearing registration No. AS-01 AB-3298 driven by one Karjom Ori.

Drugs worth Rs 5 lakhs (approx) were recovered from his possession and accordingly seized. A case vide Aalo PS Case No. 64/20 u/s 21 (b)/27-A NDPS Act, r/w Sec 34 IPC was registered. Both Mogum Loyi and Karjom Ori were arrested in the case.

During  interrogation, Shakal revealed the names of several other persons whom he had engaged for peddling of drugs to the youth of West Siang District and Leparada District. Accordingly, three more accused viz. Tanon Takuk, Taguli Paleng and Dhan Bahadur Gurung were also arrested in the instant case.

Upon further interrogation, it was learnt that Shakal used to procure the heroin from Assam. These packages of drugs used to reach West Siang from Sibsagar District of Assam via Dhemaji district, Assam through one Navajyoti Kaman alias Raju of Baikantapur village (middle man).

On 21.09.2020 ADS West Siang Police left for Jonai, Assam with a well devised plan to trap Raju Kaman. The duo arrested from Assam and one Mogum Loyi of Aalo, all of these three are teachers by profession.

With a decoy he was successfully trapped and apprehended which led to arrest of the main person, Bhupen Pegu of Haluwating area of Sibsagar District, Assam who used to supply drugs to peddlers of Jonai and Simen Sapori area which eventually was trafficked into Arunachal Pradesh.

With the arrest of the duo Heroin worth Rs 20 lakh (approx) was recovered. Both the persons and the seized contraband substance were produced before Sub Divisional Judicial Magistarte, Jonai and were brought to Aalo PS on the strength of transit reamand.

With the busting of this inter-state drug racket we are believe that the major chain of drug supply in the area has been disrupted. Also in previous month 06 (six) major drug dealers in the district had been arrested (in connection with Aalo PS C/No. 55/20 U/S 21(b)/20(b)/27(a)/27A r/w sec 34 IPC) who are still in jail. ADS is also working in coordination with Leparada district police to nab the peddlers in the district. Yesterday on 23rd September in another coordinated effort six peddlers have been arrested from West Siang distt and the arrested persons have been taken to Leparada district.

Our efforts for last half a year may eventually lead a complete stop to drug supply in the distt. But the question is “for how long?”. If more youths do not further involve in trafficking and peddling, I think we are in a comfortable position for a fresh start… Said SP, West Siang.