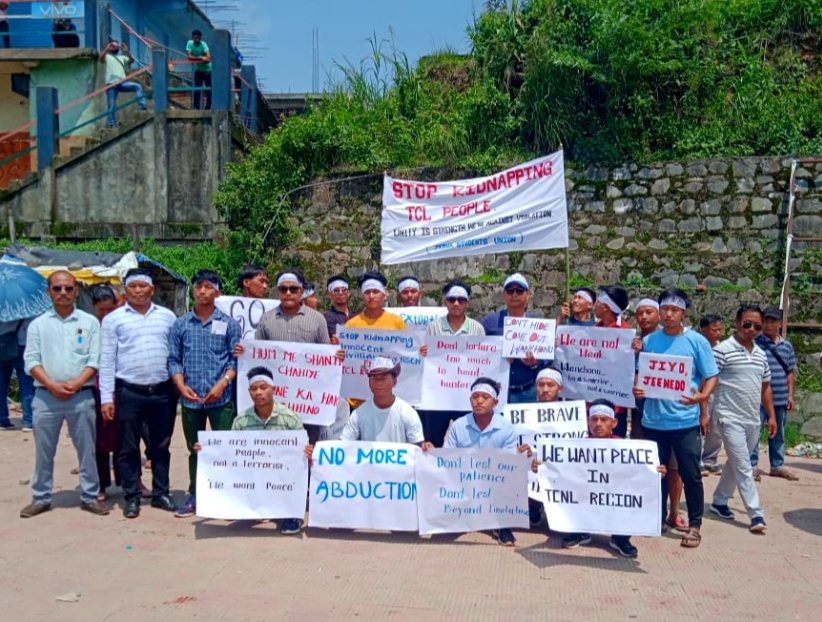 Holding placards and banners inscribed with “No Extortion”, “No Kidnapping” and “No More Humiliation”, protesters shouted slogans against the atrocities by NSCN (K-YA). The massive protest was seen as a desperate call for help from the authorities to act against the insurgent group in the border state.

Sources said that under sustained pressure from relentless successful operations by the security forces against insurgent groups in Longding district and villagers’ refusal to pay illegal house tax to armed groups, NSCN(K-YA) has been using a new strategy in recent times.

In order to evade security forces, NSCN(K-YA) insurgents are using the neighbouring Mon district of Nagaland as a safe haven to orchestrate their illegal activities. The insurgents deceitfully call the villagers for discussion in border villages of Nagaland and forcibly detain them to demand ransom.

On a few occasions, the insurgents sneaked in from jungles in Nagaland and kidnapped village heads for ransom.

Outraged by the activities of the NSCN(K-YA), the Wancho Council, the top tribal body of Longding district, took a decision on May 24 to protest against the illegal activities of the insurgents. They have asked the Tirap Changlang People’s Forum to express solidarity with them.

Sources said the protests in open defiance of the insurgents are an indication of the weaning support base of armed groups in Wancho region. The newfound courage of villagers and their belief in security forces and administration will go a long way in restoring peace and normalcy in the insurgency infested areas of Arunachal Pradesh, sources have said.

The development came in the backdrop of a spree of kidnappings in the past few months, with the Gaon Burah (village headman) of Chatong village being the latest victim of abduction. Sources said the Chatong Village headman, Tingpho Lukham, was released by the militants on Monday.

Recently a village headman Napho Nigam of Lauksim village in was abducted by NSCN K-YA cadres on May 7. The alleged cadres were in combat dress with long-range weapons when kidnapping the person. However The NSCN K-YA on May 10 finally freed Napho.