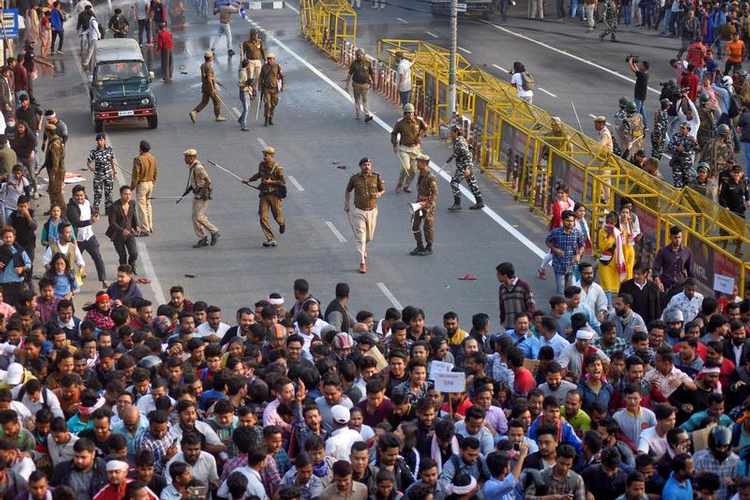 GUWAHATI: A year after five persons including a school student was killed while protesting the contentious Citizenship (Amendment) Act (CAA) in Assam, the issue of illegal migrants and their citizenship has once again come into focus.

While indigenous groups in Assam have already started to renew their movements against the Act, Krishak Mukti Sangram Samiti (KMSS) leader Akhil Gogoi on Friday said that the people of Assam ‘will not and shall not’ allow the Act to be in force at any cost.

“Almost 1.9 Cr people will get citizenship if CAA is implemented in Assam. That’s why we must reignite the fight against CAA and fight against it in full force,” said Gogoi who has been in jail for one year now. On Friday, he made the statement while brought to the Gauhati Medical College Hospital (GMCH) for regular medical checkups.

On December 12, Akhil was first arrested by state police and then handed over to the National Investigation Agency (NIA) during an anti CAA protest. He was booked under the Unlawful Activities (Prevention) Act (UAPA). Since then he was behind the bars and under trial.

He said, “All I request the people of Assam that everyone must unite and uproot BJP from Dispur in 2021 and bring a government formed by regional fronts. The next government must take a cabinet decision and pass a resolution in the first session of the House that CAA will not be implemented in Assam.”

The KMSS has announced to observe Sankalp Divas (pledge day) on Saturday in the city to renew its vow to protest against CAA in tooth and nail.

On Saturday, on the completion of one year of the anti CAA movements in the state, the All Assam Students’ Union (AASU) has also organised a public homage program to pay tribute to the five persons- Sam Stafford, Dipanjal Das, Ishwar Nayak, Abdul Alim and Dwijendra Panging- who were killed in police firing during the anti CAA movement.

Former AASU leader Lurinjyoti Gogoi who was at the forefront of the anti CAA movement in Assam said, “One year has passed but the people of Assam have not forgotten the scenes of police atrocity upon students. Those in power have betrayed the people of Assam. Assamese community is a warrior community and will give its fitting reply on time.”

Despite a year has passed, the legislation remained ineffective as rules were yet to be notified by the Ministry of Home Affairs (MHA).

Recently, senior BJP leader Kailash Vijayvargiya announced in West Bengal that the granting of citizenship to the non-Muslim migrants from Bangladesh, Pakistan and Afghanistan under the CAA will begin, most likely from January 2021.

The amended Citizenship Act enables the granting of Indian citizenship to religiously persecuted minorities from Afghanistan, Bangladesh and Pakistan who are Hindus, Sikhs, Buddhists, Jains, Parsis or Christians, and arrived in India before the end of December 2014.