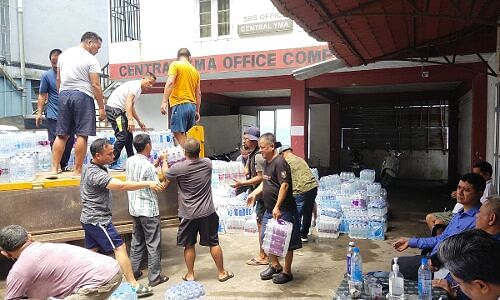 Aizawl: Mizoram has decided to provide drinking water to the residents of Silchar town in the Cachar district of Assam as the flood situation in the state remains bleak. Mizoram chief minister Zoramthanga has assured that his government will provide all possible help to flood-affected Assam. Assam Flood situation in Silchar remains grim with town submerged and many left homeless.

Assam Chief Minister Himanta Biswa took a first hand account of the situation at the ground.

Wading through the flooded streets of Silchar to see the extent of devastation caused by the ongoing floods and interact with the locals there. pic.twitter.com/wKPr2njqP9

According to an official statement, Zoramthanga and his Assam counterpart Himanta Biswa Sarma on June 26 had a telephonic conversation, wherein they discussed the current scenario in Assam and extended humanitarian aid to Assam. During the conversation, Zoramthanga conveyed that his government is willing to extend assistance to flood-affected people of Assam during these tough times.

The two CM’s held a discussion where the duo tried to figure out the ways in which Mizoram can send drinking water to flood-ravaged Assam.

Zoramthanga said that Mizoram is willing to provide and transport drinking water by trucks to Vairengte on the Mizoram-Assam border from where the Assam government will distribute it to the flood-affected people of the state.

The Assam CM thanked his Mizoram counterpart and told him that he would ask the Cachar Deputy Commissioner to make arrangements for reception and distribution of drinking water from Mizoram.

An exemplary act coming from our neighbour!

Meanwhile, the Central Young Mizo Association (CYMA) and many branches of the YMA in the state capital Aizawl have provided assistance by delivering bottled drinking water to the neighbouring state, especially to the flood-devastated people of the Cachar district.

Mizoram disaster management and rehabilitation minister Lalchamliana informed that the CYMA dispatched more than 14,000 litres of bottled drinking water to Silchar on June 26.