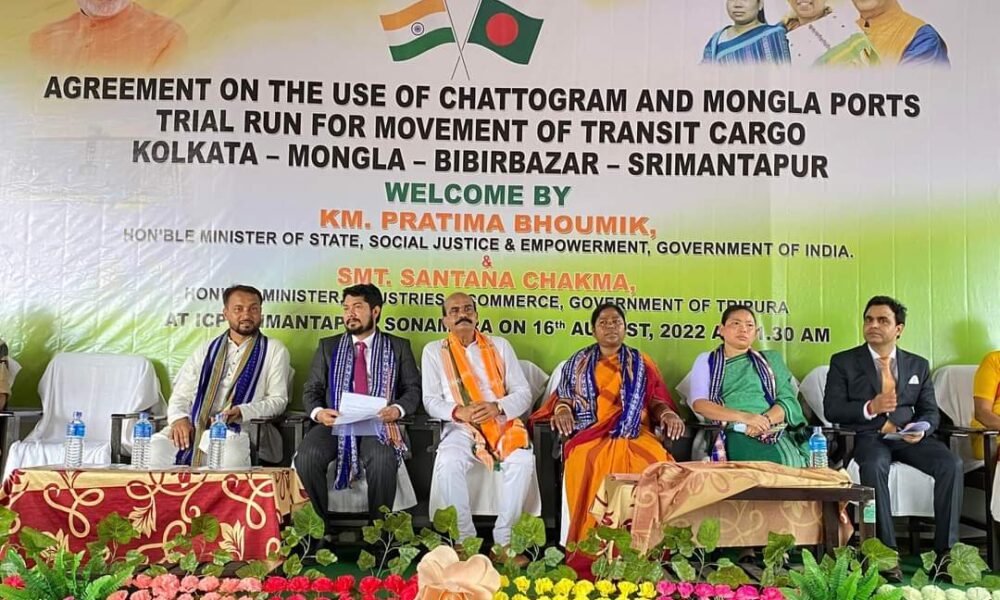 AGARTALA: A trial run was conducted where Assam bound cargo from Kolkata port was brought to Tripura via Bangladesh’s Mongla port on Tuesday, heralding a new avenue of India-Bangladesh cooperation.

The goods were transported to western Tripura’s Srimantapur ICP from Mongla port by road and then moved to their destination in Silchar in southern Assam.

The trial run was conducted before the implementation of an agreement on the use of neighbouring Bangladesh’s Chittagong and Mongla ports by India for trade and transport involving mountainous northeastern states.

India and Bangladesh signed a Memorandum of Understanding on June 6, 2015, for use of Chattogram and Mongla ports to facilitate the transit of Indian goods through Bangladesh.

Subsequent to the MoU, the two countries signed an Agreement on the use of Chattogram and Mongla Ports for the movement of goods and the Standard Operating Procedure (for operationalising the agreement) was also signed on October 5, 2019.

Four entry and exit points are provided in the agreement – Agartala and Srimantapur (Tripura), Sutarkandi (Assam) and Dawki (Meghalaya).

The annual volume of trade of Srimantapur ICP is Rs 13.62 crore.

Considering the demand for fish import, the Central government has taken initiative to make available services of Animal Quarantine in Srimantapur ICP so that import of fish through this ICP materialises, the official said.

After the arrival of the goods from Kolkata to Srimantapur ICP, Union Minister of State for Social Justice and Empowerment Pratima Bhowmik, Tripura’s Industry and Commerce Minister Santana Chakma and Indian and Bangladesh officials were present.

Agartala via Guwahati is 1,650 km from Kolkata by road, and 2,637 km from New Delhi while the distance between Agartala and Kolkata via Bangladesh is just 620 km.

If the essentials, various goods and machinery are ferried from different parts of India to the mountainous northeastern states using Bangladeshi ports and surface roads, it would save time and transportation costs.

The Chittagong international sea port in Bangladesh is 75 km from southern Tripura.

Business communities observed that the initiative would help to boost business flow on inland waterways via the Indo-Bangla Protocol route. (IANS)