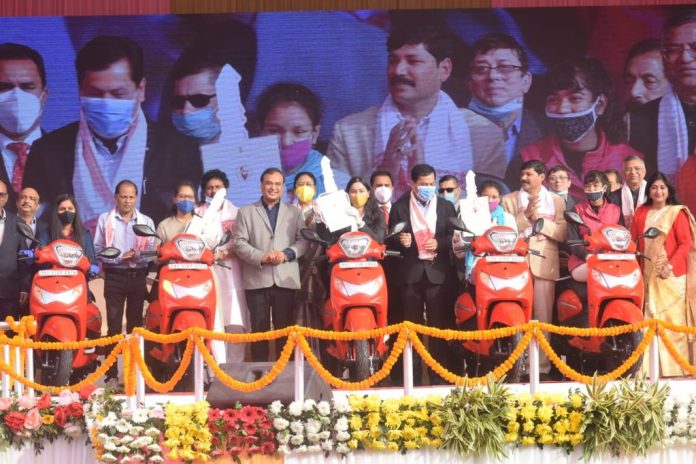 GUWAHATI: The Assam government launched Dr. Banikanta Kakaty Merit Award scheme. The scheme would provide red scooters to meritorious girl students who have passed the higher secondary examination for the year 2020 in the first division.

Launching the award ceremony chief minister Sarbananda Sonowal said that education helps people to add value to their personality and urged students to develop their innovative skills to be successful in life.

“The red coloured scooters presented on the occasion would carry the success stories of the girl students in every nook and corner of the state. The scheme would transform the lives of many girl students boosting their self-confidence besides inspiring many more to take up studies seriously,” he added.

In Kamrup and Kamrup (Metro) district 22,034 petrol-driven scooters and 211 battery driven scooter would be provided to a total of 22,245 girl students with an expenditure of Rs. 144.30 crores. Meritorious girl students of other districts would be given the award on January 2 next year.

Assam CM stated that the Central and the state governments have been taking numerous steps to uphold the dignity of women and safeguarding their pride, the CM highlighted schemes such as PM Ujjala, Beti Bachao Beti Padhao, Jan-Dhan Yojana etc.

“The ‘Arunodoi’ scheme which benefits several lakh women of the state and the state government welfare schemes in last four and a half years have touched the lives of 70 lakh families including women and helped them to be self-sufficient,” Sonowal added.

State’s education minister Himanta Biswa Sarma while speaking on the occasion said that though the state government had launched Dr. Banikanta Kakaty Merit Award in 2017-18 and presented scooters to 1000 girl students who secured first division; it was discontinued in 2018-19 and 2019-20 due to several reasons.

Sarma said, “The state government has now decided to give away the scooters to the meritorious girl students of that period in February next year which would benefit 5000 and 10000 girl students respectively.”

He further said that the state government while presenting more than 22 thousand scooters to girl students this year would be able to cover all together 40 thousand girl students by this award since its launch in 2017-18.