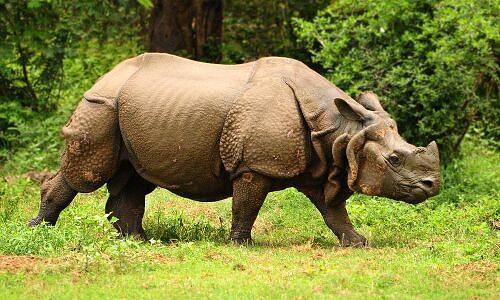 Guwahati: Assam Police have shot an alleged Rhino Poacher tries to escape from the police custody. Police said the the egion poacher tried evade their custody in the Biswanath district of Assam. The injured criminal has been identified as Zakir Hussain, who was accused of rhino poaching.

The Biswanath Police had arrested him from the Kaladuba area in Juria which falls under the Nagaon district on May 28.

The police have informed that Zakir Hussain happens to be the associate of the deceased rhino poacher Nalkur.

The incident unravelled when Zakir was taken by the police on the night of 29 May to disclose the spot where he had hidden illegal weapons. However, he had other plans in his mind and allegedly attacked on-duty police personnel to escape from their custody but instead, he ended up getting shot in his leg.

The injured poacher has been admitted to the Tezpur Medical College and Hospital (TMCH) for medical treatment. On the other hand, a police constable going by the name of Ismail Ali had sustained injuries during the incident and he was being treated at a hospital.

Meanwhile, taking a serious note of the taking away of the horn of a living full-grown rhino using tranquillizer in Orang National Park and Tiger Reserve (ONPTR) recently, Darrang Police had announced a reward of Rs 2 lakh to any individual or organization for providing any information or clue of the organized gang of the poachers involved in the heinous crime.

“Interested individuals or organizations may provide the information to the Superintendent of Police at mobile phone number 94357 46075 and the identity of such individuals would be kept secret. This is for the first time that the organized gang of poachers has changed their modus operandi and used tranquillizers to make the rhinos senseless and chopped off the horn of the living rhino,” Superintendent of Police of Darrang, Raj Mohan Ray said.

“Police will take stern action on this gang of poachers and we appeal to all sections of the society to extend all cooperation in tracing out the notorious criminals involved in it,” he added.