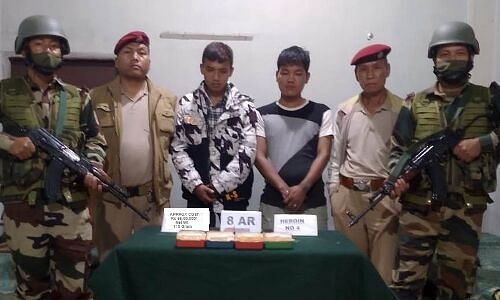 The operation was carried out by a joint team of 8 Assam Rifles and the Champhai police based on specific information.

The team seized the illegal consignment and handed it over to the Champhai police on Thursday along with two apprehended individuals for further legal proceedings.

In another development, in a major successful operation against anti-national activities, the Serchhip Battalion recovered some war-like stores on Wednesday. The operation was carried out near Hnahlan- Ngur Junction of the Champhai district based on specific information.

The team located the suspected Tata Sumo vehicle (MZ01N 3932) carrying passengers on the Hnahlan- Ngur road. The vehicle was intercepted and spot checking was carried out.

During checking it was found that one of the passengers was illegally carrying explosive items (WLS) which included gelatin sticks, detonators, cordtex and safety fuse concealed in a blue bag.

Such war like stores could have endangered the lives of innocent people and led to various illegal activities. This recovery has prevented the loss of precious lives.