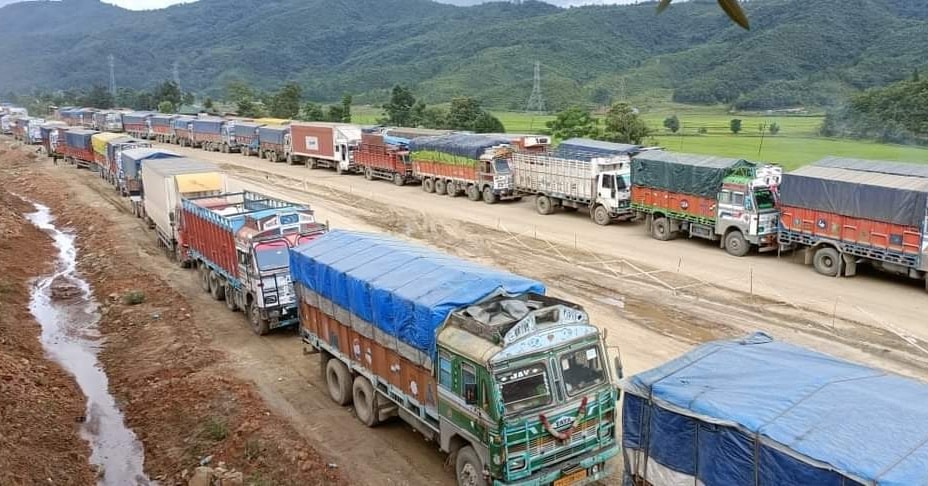 ATSUM said that the student body considering the plights of the people made an official announcement to ‘temporarily’ suspend the blockade in its emergency meeting at Kangpokpi District Headquarters today. However, the tribal student apex body resolved to further continue its stir with various democratic forms of agitation which they have not yet specifically announced.

After the emergency meeting today, the ATSUM leaders and its federating unit members held their hands together and held a mass prayer for success in their movement.

Earlier, ATSUM had suspended it Vice-President who was a signatory to MoU

Speaking to the media, ATSUM officials said “we reaffirm our stand for the introduction of the HAC recommended The Manipur (Hill Areas) Autonomous District Councils Bill 2021 in the Manipur Legislative Assembly”.

The demand of ATSUM is to streamline the Constitutional rights of the tribals as given in Article 371 (C) read with the Presidential order of 1972.Andrea continued that the ATSUM reminded the members of the need for HAC to clear their position on the said Bill which was unanimously recommended on August 16, 2021.Further, the State Government should honour the Memorandum of Understanding (MoU) signed with ATSUM on November 25, 2021, and implement the same at the earliest time without any further delay, he added.

While reaffirming the position of ATSUM on the ADC Bill 2021, the ATSUM general secretary, however, said that considering the plight of the public “we have decided to suspend the ongoing economic blockade along the National Highways of the State with immediate effect but resolve to further continue the agitation with other forms of democratic agitations”.

He added that the office of ATSUM extends heartfelt gratitude to ANSAM, KSO, ATSUM federating units, senior leaders, and the public for extending unflinching support to the genuine demand for the realization of the Constitutional rights of the tribals.

The tribal student body also appealed to all to continue supporting the movement for securing the future ofthe tribal people.