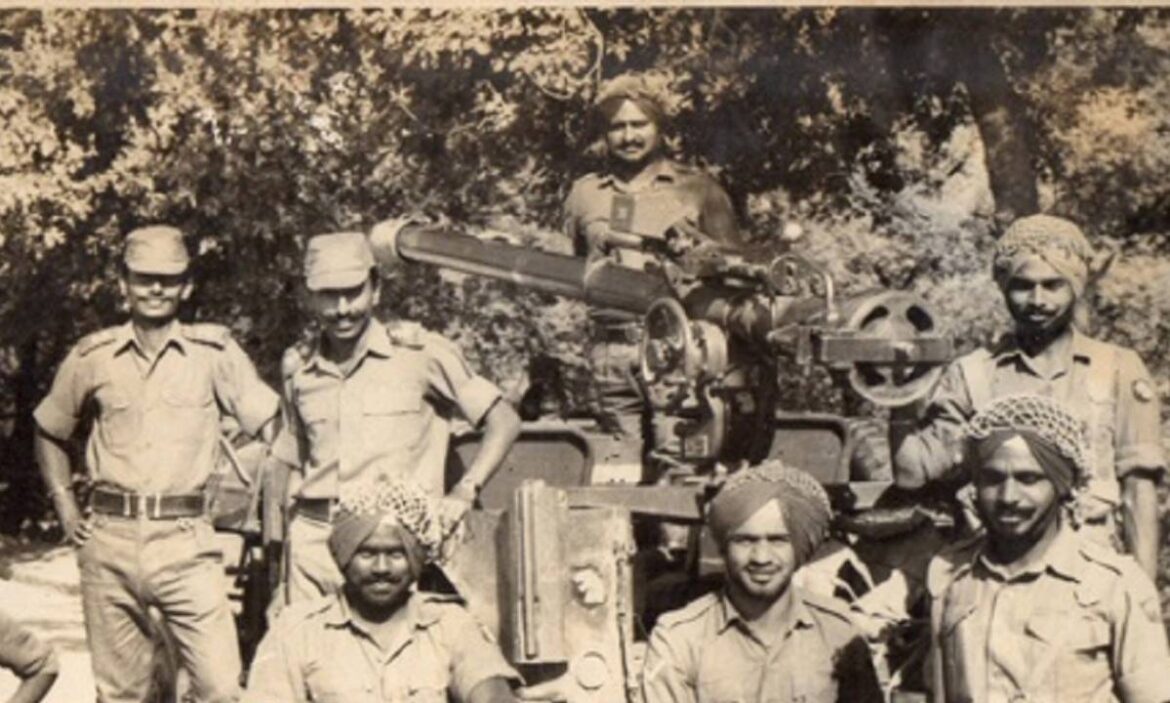 Around six o’clock, on 3 December, as they were seated in their bunkers, the men heard the sound of fighter jets flying over their head.

“In those days we could see the night lights of Lahore where the sky meets the earth from where we were. And suddenly there were flares. The artillery had started firing. The whistling sound of shells flying over our heads meant they were not falling on us but going over. We all got ready and said ‘thank god the war has begun’. Some of us even ran out to the officers’ mess in the bunkers and said let us have one scotch whiskey”.

When they asked the mess havaldar for a glass of scotch each, he quizzed ‘kyun sahab’., ‘Cause we are celebrating that the war has finally begun’ they valiantly told him.

But that it would end up taking away many of those that raised a toast that night was not a thought that crossed their minds.

In moments though, ”we saw their jets return. They were being chased by our aircrafts as their plans had been foiled. They wanted to attack our air force on the ground itself but our aircrafts were prepared and ruined their plans of a blitzkrieg,”.

But in the days that followed, Pakistan managed to capture certain weak areas pushing back the BSF and other forces. They also managed to capture the Fatehpur post – that was giving them a vantage position given their location in the plains.

The 8 Sikh LI now had its task cut out – to capture Fatehpur back – not just the Indian post but the Pakistani one too.

This was a post the battalion had never seen. But the order was there – By 12 December 1971, Fatehpur post had to be captured and the enemy thrown beyond the Ravi.

“Intelligence kept changing because the reconnaissance that was sent out initially said there was one platoon of Pakistani soldiers and one platoon of Mujahid, then it became two platoons of regulars.”

Pakistani soldiers had attacked a post that was manned by non-Sikh battalion troops. But by the time they could capture it and settle down, there was a commando platoon of 8 Sikh LI that was lying in there along the Dussi Bund that attacked them – leaving them shell shocked.

There was a daring counter-attack that left Rai’s good friend 2 Lt JJ Singh wounded. Recollecting some of the earliest incidents that left a strong mark on him, Rai recalls one where Naik Subedar Surjit Singh pulled a machine gun of a Pakistani soldier and gave him one kick on his head.

Another havaldar was hurt such that his full intestine was gutting out. ‘We reached there just then, shoved his intestine back into his stomach, removed his turban and wrapped it around his stomach and evacuated him,‘.

Meanwhile, ‘I was watching this Surjit Singh, he was walking around as if nothing had happened, busy instructing the boys to pick this and that. But I saw something was wrong with him. Then I suddenly saw that his thumb and three fingers were missing – they were burnt and singed – which means there was no bleeding – like sutures- and the last finger was hanging with the skin – but that fellow was not even aware that it had hit him – he was just going about his duties”.

And the man whose intestines they shoved inside too miraculously survived. ‘These were the first things I saw,’ he reminisces.

And then came the D Day – 11 December. The H-Hour was 2300 hours. As they prepared for the attack later that night, they had their ‘hot meal’ at the assembly area.

The truck with the hot meal arrived. ‘Nayyar being the junior-most brought the dal in the mess tin.’

Nayyar who was in Bravo, and Karan Singh who was in Alpha sat with Rai under a tree in the darkness and had the ‘hot mean’ – a mess tin full of dal and a lump of chapatis. The three had shared a room back in Jalandhar.

‘We knew we were going to attack in the next three hours but we never spoke or thought of life and death and the like,’ he muses. Post the meal, the trio shook hands and they joined their respective companies while Rai joined his commanding officer.

The battle that ensued that night was a fierce one. What started at 11 pm on 11 December went on till the wee hours of 12 December with the battalion suffering huge casualties.

‘It was a hand to hand fight, in the hour of darkness. The para illumination by the Pakistanis had the whole area illuminated, there was dust smoke, shelling screaming. This was the first stage,’ he explains, as he takes us through the hours moment by moment.

Both Bravo and Charlie teams who were leading the assault had suffered huge casualties. Rai was behind them with the CO followed by the Alpha and Delta company. If both of these would not succeed, ‘it was going to be a failure. And a failure is the biggest insult for a soldier. He will be disgraced,’ he says.

Rai then chose to lead and pull up the fallen soldiers. ”The company commander had fallen sick. I said no falling back, just follow me. I was flashing the torch on their faces, kicking them to move but we had to see it through. The para flares were giving a ghostly shadow to the ghastly scene around,” he describes.

The hand to hand fight went on up to 1.30 in the night. “You are stabbing someone on a bayonet, hurling a grande. Somebody is shouting ‘ya Ali ya ali’ and cursing in Urdu. But finally, we went and captured the objective and so did Bravo followed by Alpha and Delta,” he says reliving all the moments that made that fateful night.

Rai recounts the tale of yet another soldier whose sacrifice and daredevilry he says was characteristic of a Sikh soldier.

‘Alpha company had one daredevil named Major Tirath Singh. When he reached the head of the diamond after capturing it he was left with just about 15 men – others were staggering behind or lost.

Pakistanis also didn’t want to give up. It was about 3 in the morning – they launched a counter-attack – as he was the closest to the Pakistanis – he repulsed them, they fell back – after half an hour again they regrouped and attacked him – he was left with just six men.

At this point, Major Tirath Singh knew that if he were to withdraw at that point for the head of the diamond, the balance would be lost.

In those days, explains Rai, there was a thing known as ‘red red red’, which is no longer part of the Indian army operations. ‘Red red red’ meant you asking the artillery to fire on you – ‘you give your position and say here I am at the head of the diamond and say ‘fire on me’ – because I am having ten men but I am surrounded by 50 enemy soldiers which means if one of us die – at least five die there.’

Getting nostalgic about Singh’s family back in Jalandhar, with two sons who were then aged four and two and his newborn daughter, Rai reminisces the sacrifice that Singh made with utmost pride and honour. Even though the higher commanders asked him to reconsider his decision but he said loud and clear ‘I am asking you red red red’.

It is because of such men who dared to die that we are sitting here to tell the tale, muses Rai remembering the action-packed night.

‘There is no greater honour for a Sardar than to die on the battlefield. It is true for every warrior but more so for our Sikh soldiers,’ he adds quoting words of Guru Gobind Singh, which, during Rai’s journey with the Sikh Regiment and to this day, fuel his urge to live and die for the nation. ‘Sura so pehchaniye jo lare din ke heth, purja purja kat mare kabhun na chhade khet,’ – the real hero is the one who fights for the weak and even if his limbs be severed bit by hit, he flees not the battlefield’.

In the Line of Duty

As casualties began to rise, the CO sent an officer to get the medical supplies. Recollecting the unfortunate incident where a nursing assistant, KC Mathew was burnt alive, Rai narrates how the entire 3-tonne truck carrying the medical supplies was blown up as it came on an anti-tank mine.

‘The doctor was thrown out of the driver’s cabin – his leg was all shattered. The havaldars were all thrown out – one nursing assistant Mathews went up and fell down back in the truck – and the truck got fire – so he was burnt while being semi-conscious. So many soldiers died because medical assistance could not reach them in time,” he laments.

The next morning, he had to do the duty of paying last respects to those who had fallen in the line of duty and the first sheets he lifted revealed the bodies of his two roommates.