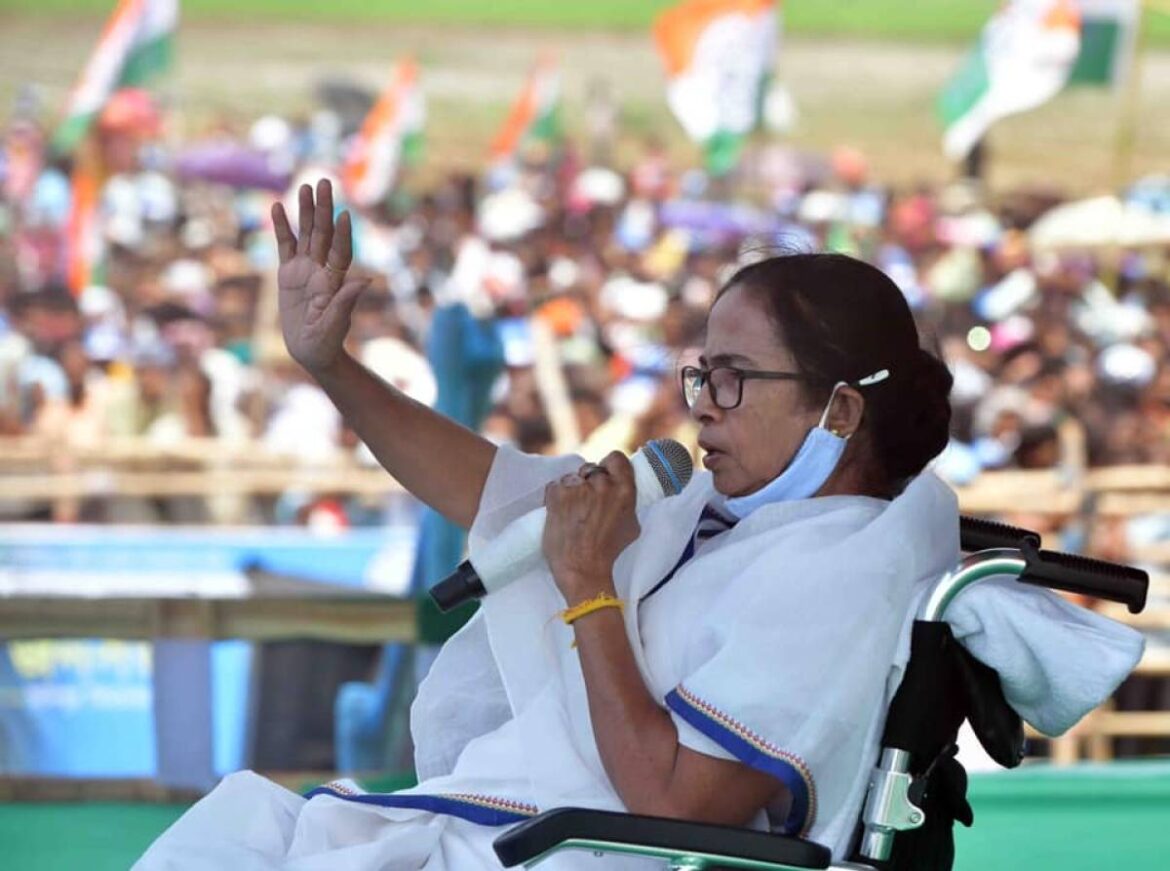 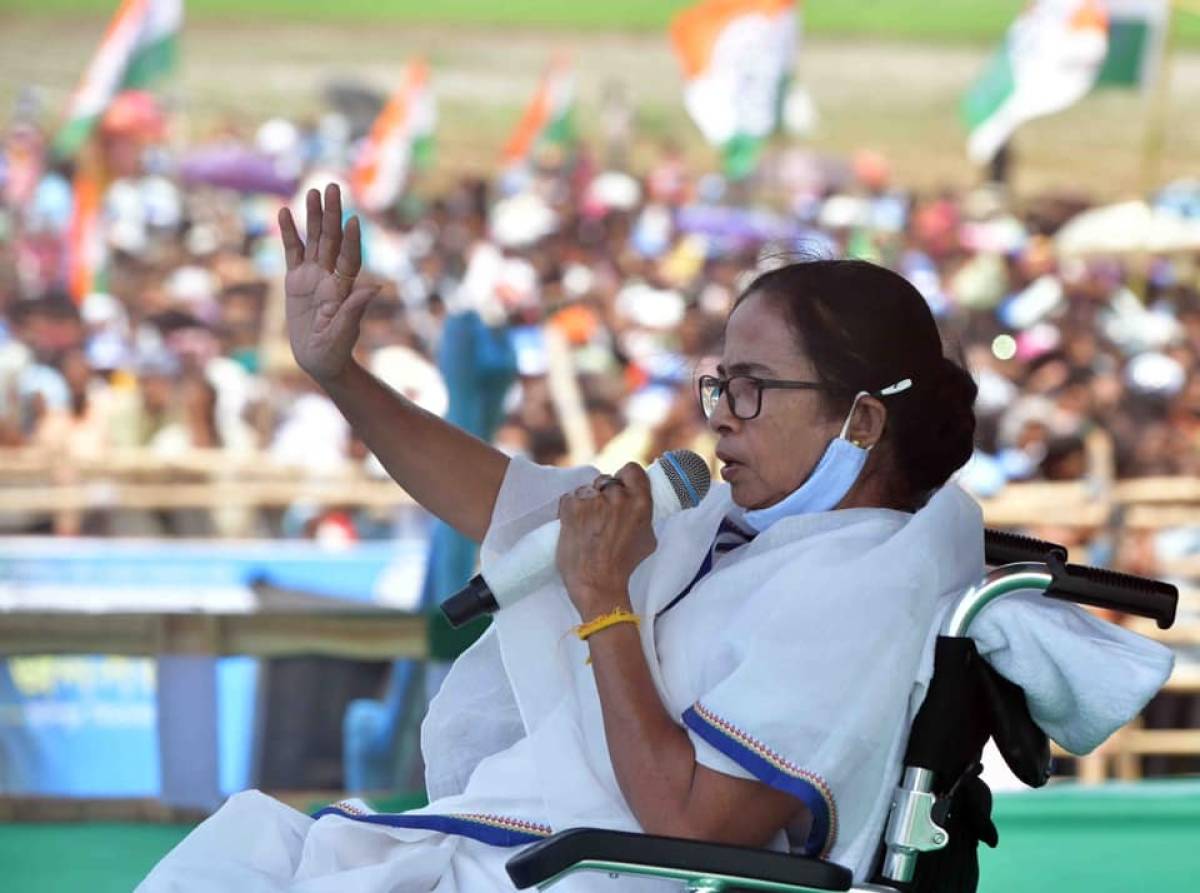 As the second phase of polling, which was marred by the characteristic violence and allegations of rigging, ended in 30 constituencies in Bengal on Thursday, the question on everyone’s mind was: will Trinamool chief Mamata Banerjee seek a safe seat to contest from?

That’s because the Trinamool supremo’s conduct on Thursday, her body language and the wild allegations she hurled against the Election Commission, the BJP, Prime Minister Modi and Union Home Minister Amit Shah indicated that she was uncertain of victory.

Never before in the electoral history of India did an incumbent chief minister have to rush to a polling booth (booth number 7 at Boyal Primary School) after receiving complaints that her agents and committed voters were not being allowed inside the booth.

Mamata Banerjee, accompanied by a large number of her supporters, reached the booth at around 1.40 pm to ensure that no voter was stopped from coming in to vote.

Even as she reached the booth, a large number of BJP supporters, all locals, gathered and started protesting fiercely. The protestors, mostly women, alleged that Mamata Banerjee was trying to get her own supporters to impersonate genuine voters and rig the polls.

A large number of Trinamool supporters, most of them Muslims, also gathered and alleged that they were not allowed to cast their votes.

Fearing a clash, central forces were rushed in and about 80 minutes later, senior police officer Nagendra Tripathi who had been drafted by the EC to ensure peaceful polling in Nandigram also arrived.

All this while, Mamata Banerjee remained inside the booth since it was deemed to be too dangerous for her to venture out.

Tripathi managed to pacify the BJP supporters and convinced them to move to a safe distance from the booth. Trinamool supporters were also pushed back and Mamata Banerjee could ultimately leave around 3.30 pm, nearly two hours after she had entered the booth.

While she was inside the booth, the Trinamool chief called up her bete noire, Governor Jagdeep Dhankar, and complained that the BJP was trying to rig the polls.

After leaving Boyal, Mamata Banerjee held an impromptu press conference and complained against the EC, alleging that the Commission was acting on the behest of Union Home Minister Amit Shah.

She accused Amit Shah of directing the central forces to help the BJP cadres rig the polls. She also, quite ludicrously, accused Prime Minister Modi of violating the election code of conduct by campaigning in the state while polling was on.

Modi addressed a massive rally at South 24 Parganas’ Joynagar and Howrah’s Uluberia which go to the polls on 6 April. That campaigning there will end on 4 April, a full three days away, was lost on an angry Banerjee.

Banerjee’s demeanour, her anger, her appeal to the Governor, and her allegations against the EC and BJP leaders all conveyed an impression that she was apprehensive of the outcome of the polls in Nandigram.

In stark contrast, Suvendu Adhikari appeared confident. He also alleged that the Trinamool had been trying to rig the polls, but he was quick to add that with the help of central forces, he was successful in defeating their attempts.

In Bengal, projection of power on the day of polling matters a lot. Usually, it is the ruling party, thanks to its vast resources and its control over the state administration as well as the police, which projects power.

This projection of power influences voters and gives the much-required confidence to supporters of the party that is projecting this power to go to the polling station and vote.

On the other hand, supporters of the parties that are in opposition to the one projecting power on the day of polling will feel intimidated and will be fearful of venturing to the polling booth. That’s the stark electoral reality in Bengal.

On Thursday, it was the BJP which projected power while Trinamool was on the defensive. It is thus quite possible that many Trinamool supporters did not cast their votes.

This severely affects Mamata Banerjee’s chances of winning Nandigram. Mamata Banerjee is an astute politician and her political instincts are sharp. She has her fingers on the pulse of the people.

She, thus, would be very worried at the end of the day. Losing Nandigram would be a huge blow to her.

And if the Trinamool loses Bengal as well, she knows that it will be difficult for her to stage a comeback.

As an MLA, she will be the Leader of the Opposition and can survive to fight another day. But if she loses Nandigram and her party loses power as well, it will be a debilitating blow to her political career.

That’s why, in order to insure herself from such a catastrophe, Banerjee may be now searching for a safe seat to contest from.

She still has a few days to decide: the last date for filing nominations for the sixth phase of polls is 3 April while it is 7 April for the constituencies going to the polls in the seventh and eighth phases.

Prime Minister Modi himself gave credence to rumours that the Trinamool chief was scouting for a second seat to contest from.

Addressing a massive rally at Uluberia, Modi asked: “Didi, is there any truth in the rumours that you are going to file nominations from another constituency? First you went there (Nandigram) and people gave you an answer. If you go somewhere else, people of Bengal are ready”.

However, if the Trinamool chief decides to contest from another constituency, she runs the risk of projecting to the people of Bengal that she is running scared.

That will affect her party’s prospects in the next six phases of elections to the 234 seats.

Mamata Banerjee is thus on the horns of a dilemma: contesting from another constituency would stave off the prospect of a blow to her political career but also mar the Trinamool’s chances of doing even remotely well in the last six phases of polls to a majority of the seats.