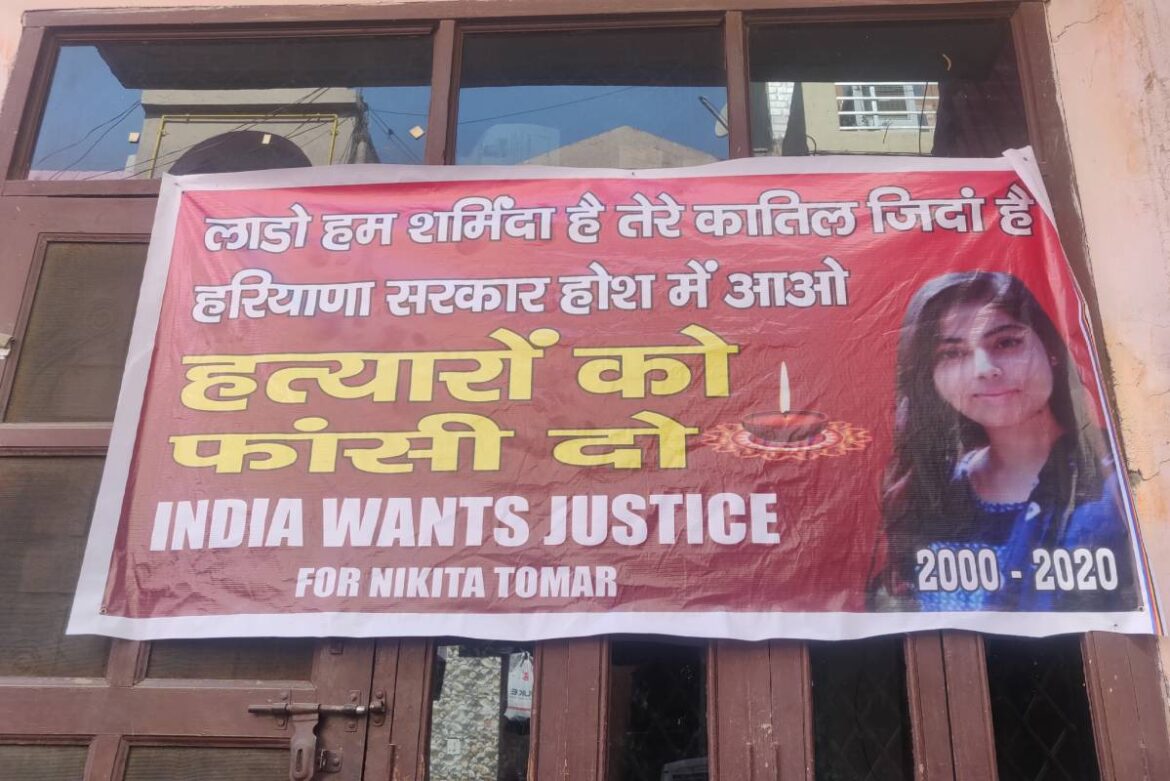 Before killing Nikita Tomar over a one-sided love affair, Mohammed Tausif had kidnapped her and kept her at his house overnight.

After her rescue, Nikita told her parents that Tausif wanted to make her “unmarriageable” so she would be left with no option but to have nikah with him. This was recently revealed by Nitika’s father Moolchand Tomar to this correspondent.

Nikita, who would have turned 21 last month, was shot dead by Tausif on 26 October, 2020 outside her college in Haryana’s Faridabad district. A video of the killing, captured on a CCTV camera, was widely shared on social media.

Tausif was her senior at school, which she had completed three years ago. That fateful day, Nikita was emerging out of college after writing her final examination for her Bachelors in Commerce (Honors) degree.

A year earlier, Tausif had kidnapped Nikita. A first information report (FIR) in the matter was registered at a local police station, hours before she was rescued.

Not much has been written about in the media about the kidnapping case. In a recent conversation with this correspondent, Moolchand Tomar revealed some startling facts.

On 2 August, 2018, Nikita emerged out of the Ballabhgarh campus of Aggarwal College as usual around noon. Tausif, who had been stalking her since school days, was waiting at the gate in a car. He forcibly made Nikita sit inside and sped off. One of her friends immediately called Nikita’s father.

Moolchand immediately went to Ballabhgarh Police Station. He says the thana in-charge told him that he should give his complaint to Sanjay Colony Police Station instead, because Nikita’s residence fell in their jurisdiction. Moolchand says the policeman showed no sympathy or alarm.

The thana in-charge at the other police station told him that he must go back to Ballabhgarh Police Station as site of the crime fell in their jurisdiction. Moolchand says he was on the verge of tears, but the policeman offered no help beyond telling him about the functioning of the police.

By this time, a relative of Moolchand had made him talk to another relative who works in the crime branch of Haryana Police. The officer had assured Moolchand that he would personally look into the case.

By late evening, neither an FIR had been registered nor any contact made with Nikita or Tausif. Moolchand received a call from his relative in the crime branch to go to Ballabhgarh Police Station the first thing in the morning as the thana in-charge had been directed to lodge a case. Moolchand did.

The FIR, number 771, shows the time of filing as 9.40 am and date as 3 August 2018. Despite Moolchand’s statement naming Tausif that is recorded in the FIR, the police left the column for ‘suspect/accused’ blank. The unnamed kidnapper was booked under IPC section 365 (kidnapping or abducting with intent secretly and wrongfully to confine person.

Moolchand says the police officer who took the complaint showed no sense of urgency or willingness to find her. “I was fully dependent on my relative,” he says.

A team led by his relative in the crime branch located Tausif’s house and raided it. It was located in Javed Colony on Sohna Road. Moolchand recalls the colony as a “lower middle class” residential area. Tausif’s house however stood out for its size and opulence compared to neighbouring ones. There was also a car parked outside.

“I was standing outside Tausif’s house the whole time. I won’t lie – Tausif’s parents accompanied my daughter and respectfully handed her over to me. They also apologised with folded hands for the “mistake” of their son. “Nikita looked fine, though terribly scared. I managed to steal a glance at Tausif. He looked like a regular guy, but defiant and remorseless. He did not come near me,” recalls Moolchand.

It was around 1 30 pm. Moolchand and Nikita sat in the police vehicle and straightaway went to a mahila thana to record her statement under Section 161 of the Code of Criminal Procedure (CrPC).

The only conversation I could have with Nikita in the vehicle was that I asked her if she was fine and she nodded her head that she was.

Moolchand says that all that Nikita told police in her brief statement was that Tausif kidnapped her outside her college, switched off her mobile phone, drove her around the city and took her in his house in the night. He “did not touch her”, she said in the statement.

The father and the daughter returned to their house late evening to prying eyes of neighbours and hostile questions by some women relatives who had come to console Nikita’s mother. Moolchand says he did not get an opportunity to talk to Nikita in detail that night.

The next day, after the relatives went, Nikita sat with the family. She revealed that Tausif told her in the car that if Nikita were to marry anyone, it would be Tausif and Tausif alone. He locked the car’s doors and did not let her leave the vehicle. He had even bought and kept some food in the car. Late evening, he took her to his house where his parents were present. The parents did not ask Tausif to drop her home, but took care that she was comfortable. Nikita slept in the same room as Tausif’s mother, who kept convincing her to marry Tausif.

“She repeated to us that Tausif did ‘nothing wrong’ with her,” says Moolchand.

“She told us that Tausif wanted to make her unmarriageable. He had decided that staying at his house overnight would bring her so much shame that we would be left with no option but to marry our daughter to him,” he says.

The next day, Moolchand took her to the magistrate court to record her statement under Section 164 of the CrPC, where she repeated her earlier statement given to the police.

It was a tough phase for the family from then on. The police did not arrest Tausif. Instead, the investigating officer (IO) visited the Tomar family several times, asking “how to proceed in the case”.

“The officer would come to our house and begin telling us about Tausif’s strong political connections. How his uncles and grandfathers are senior political party workers. How his other uncles are senior police officers in Haryana police. How proceeding in the case could ultimately backfire on us,” says Moolchand. “After two-three months, I got tired of it. Some of our close relatives and neighbours had already distanced from us because of the police case and police visits. I told the officer that I want to withdraw the case. He happily obliged with details on how to go about it.”

Moolchand gave an affidavit in the magistrate court that there had been a misunderstanding and he wants to close the investigation. “This is how I washed my hands off the whole thing, to resume a normal life.”

Moolchand says that six months ago, he had with him all the documents and evidence related to the kidnapping case, including the court affidavit and phone recordings with police officers. However, thinking that he was never going to need them again in life, he trashed them all.

Tausif had never visited or talked to Moolchand before that case. He never approached him after the case either, nor did his parents.

Asked if he would have agreed to the marriage proposal had Tausif met him, Moolchand replies with a firm no. “First of all, Nikita’s marriage was nowhere in my plans anytime soon. At least for the next five years, I wouldn’t have fixed her marriage at all. She was a career-oriented girl. I had big dreams for her. Secondly, Tausif is a Muslim and we are Hindus. There is no question of an alliance. No, not with our permission,” he says.

“Nikita wouldn’t have agreed either. I know that. She did not think differently than us in these matters” he says.

“We even have proof.”

He says that during investigation in Nikita’s murder, the police pulled out Nikita’s call detail history for a year. There is no record of her conversations with Tausif.

He says Nikita was an ambitious girl with clear career goals. “She did not let the kidnapping case and ensuing shame break her emotionally. She went through a lot. Only once did she break down when talking to a relative, when she tearfully asked, ‘how was that my fault?’”

Moolchand says Nikita wanted to join the Air Force. She was confident that she would ace the Air Force Common Admission Test (AFCAT) in her next attempt. She was also going to appear for entrance examinations for various prestigious colleges for a masters in business administration (MBA).