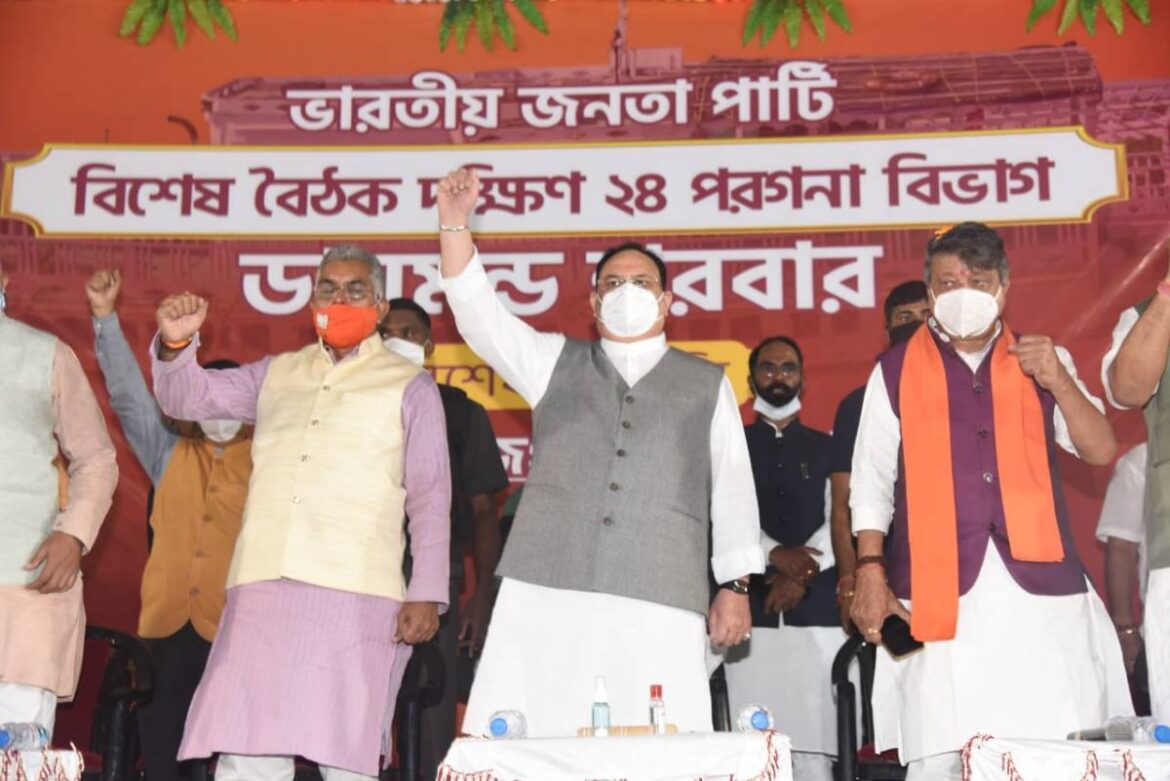 The Bengal Police appears to have taken a cue from chief minister Mamata Banerjee, who also holds the home portfolio, while trying to glibly explain away the attack on BJP national president J.P.Nadda’s convoy in South 24 Parganas adjoining Kolkata on Thursday.

Immediately after the attack, Banerjee and her senior party colleagues spun the narrative that state BJP leaders who were in Nadda’s convoy provoked the bystanders lining the route of the convoy.

The Bengal police, on cue, has confirmed this narrative that does not stand up to even a preliminary scrutiny by even a layman.

Apart from arresting seven persons under mild charges–rioting, obstructing public servants from discharging their duties etc–the police have also registered an FIR against BJP leader Rakesh Singh who was in a vehicle that was much ahead of Nadda’s bullet-proof SUV.

After chief minister Banerjee alleged that the crowds lining Nadda’s route were “provoked”, her party released a video clip (watch this) of Rakesh Singh hanging out of his SUV and gesticulating at a huge crowd of people waving Trinamool flags who were on the road.

The Bengal police now claim to have gathered testimonies from witnesses who alleged that Singh hurled communal slurs at them and insulted them in foul language.

Knowing how Bengal police gather testimonies and ‘confessions’ from people to suit their political masters, and given the fact that most chargesheets submitted by the state police fail judicial scrutiny, it can be assumed that those testimonies, too, were doctored.

Rakesh Singh claims that his convoy was stopped by Trinamool activists holding their party flag who spilled onto the road.

“They attacked my vehicle with sticks that they were carrying. It was then that I opened the door of my vehicle and stood on the footboard to ward off the attackers. The (central) security force personnel who were with me also did the same. Seeing that matters may go out of hand, the state police accompanying my vehicle and some policemen lining the route intervened and created a safe passage for my vehicle,” said Singh.

This seems to be more believable than the Bengal police version. It is inconceivable that a BJP functionary would stop in front of a crowd of Trinamool supporters and abuse them.

That, given the perennially charged political climate in Bengal and the propensity of the Trinamool to use muscle power to browbeat and silence opposition, would be a foolish thing to do.

And Rakesh Singh is no fool; he would have known that abusing a crowd of Trinamool supporters would trigger attacks on him.

But even if one is to believe the improbable police version that Singh ‘provoked’ the bystanders, there are many questions which beg answers:

From all the videos that have surfaced showing stones, bricks and glass bottles being hurled at the vehicle carrying Nadda and the ones carrying other BJP leaders that were behind him, it is clear that the crowds were well-prepared to attack.

It is clear from the videos that the police made no attempt whatsoever to disperse the crowds or prevent them from hurling bricks, stones and glass bottles at the vehicles of BJP leaders.

Also, if Mamata Banerjee’s allegation that the attacks were staged is true, then it is implausible that the police remained bystanders and failed to take action against the attackers.

The Trinamool’s reasoning that Nadda had no business travelling in a large convoy of vehicles, and allowing Rakesh Singh, who is an accused in many cases, to be part of his convoy, is also flawed.

Also, it is natural for party supporters and activists to follow the convoy of their senior leaders. When Mamata Banerjee travels to attend party programmes, her cavalcade is also accompanied by many of her party activists in two and four wheelers.

The Union Government’s summons to Bengal chief secretary and DGP to Delhi to seek an explanation from them triggered an angry reaction from the Trinamool.

Trinamool Lok Sabha MP and senior lawyer Kalyan Banerjee and others in that party have said that the Union Government is not empowered to issue such summons.

They have also argued that law and order is a state subject and the Bengal government is only answerable to the state legislature.

While it is a fact that law and order is a state subject, it is also a fact that the Constitution places the responsibility of protecting a state against internal disturbance and ensuring that a state is governed as per the provisions of the Constitution on the Union Government.

Article 355 of the Indian Constitution clearly states: It shall be the duty of the Union to protect every State against external aggression and internal disturbance and to ensure that the government of every State is carried on in accordance with the provisions of this Constitution.

The Union Government, while issuing summons to the two top Bengal officials, acted in accordance with the powers vested on it by the Constitution.

Attacks on Opposition politicians, murders of and assaults on Opposition activists and functionaries, misusing the state machinery for political ends, complete politicisation of the police and many other acts of omission and commission by the Trinamool government in the state has led to a breakdown of the Constitutional machinery in the state.

Bengal is not being run as per the provisions of the Indian Constitution and the framers of the Constitution would have, undoubtedly, sanctioned the use of Article 355 to force the state government to fall in line.

Bengal has become a textbook case that provides eminent justification for invoking Article 355 of the Constitution, and the Union Government would be failing in its Constitutional duties and in its responsibilities towards the hapless citizens of Bengal if it were to shy away from this important and necessary step.