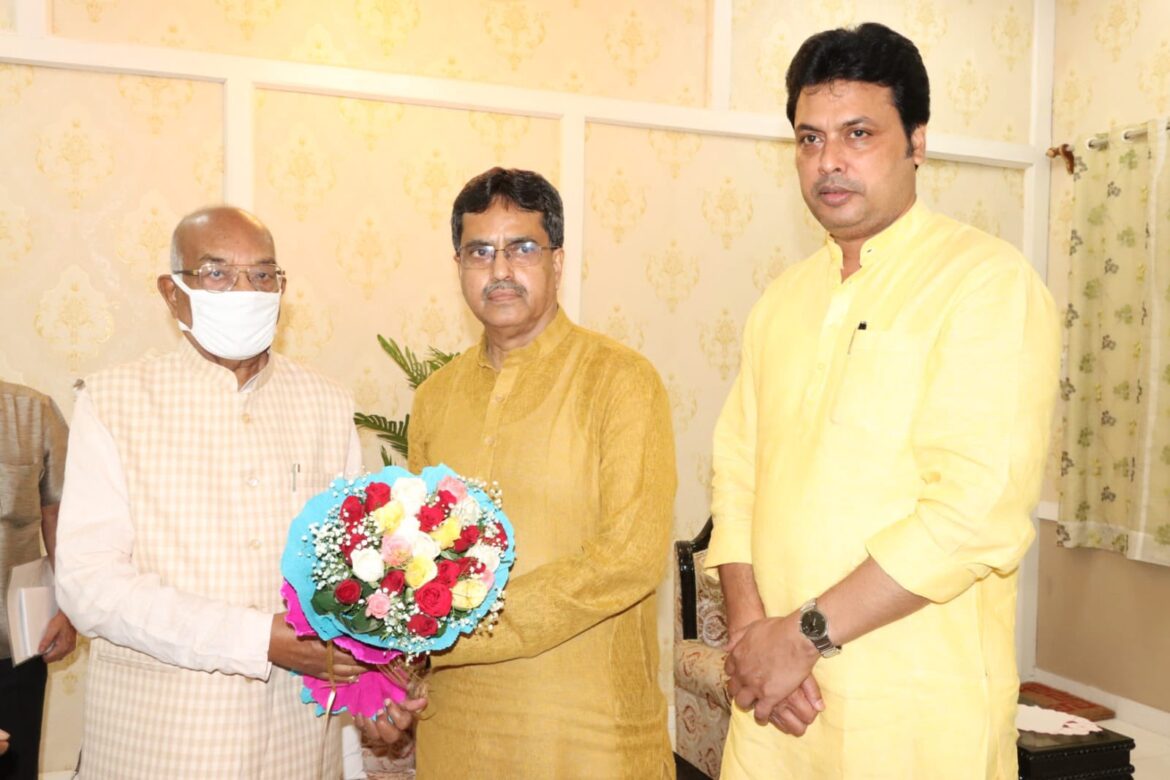 Dr Manik Saha, a dental surgeon-turned-politician who quit the Congress and joined the BJP in 2016. He was elected as a Rajya Sabha MP in the lone seat just last month and is also the Tripura state president of the BJP in 2020. The development came hours after the resignation of Tripura Chief Minister Biplab Kumar Deb in a sudden political twist.

Earlier this year, Saha after becoming State party president announced an 18-member committee of office-bearers and others as well as seven spokespersons.

Interestingly, Saha kept his post despite demands from within the party to remove him.

Senior BJP leaders Bhupender Yadav and Vinod Tawde were observers for the election of the legislature party leader.

“I was a common worker of the party and will continue to be to be so,” Mr Saha told reporters after being named the next Chief Minister.

The 69-year-old dental surgeon-turned-politician was on March 31 elected to Rajya Sabha in the lone seat of the BJP-ruled northeastern state.

Dr Saha, a professor and head of the department of the Tripura Medical College and BR Ambedkar Memorial Teaching Hospital in Agartala, joined the BJP in 2016. He is also the president of the Tripura Cricket Association.

In 2021, Mr Saha, a close associate of the outgoing Chief Minister Deb, became the president of the Tripura BJP Pradesh committee.

However, all did not go as planned and dramatic scenes were reported from the BJP headquarters in the state. Minister Ram Prasad Paul protested the proposal, which led to a heated argument among MLAs. Mr Paul also broke a few chairs before the situation was calmed. A video of him screaming and banging a chair on the ground has surfaced. “Main mar jaunga (I will die),” he can be heard screaming repeatedly.

Mr Paul reportedly wanted deputy chief minister Jishnu Dev Varma, a member of the erstwhile Tripura royal family, as the next Chief Minister of the state.

A section of BJP MLAs is miffed claiming they were not consulted and the central leadership made the decision arbitrarily.

Mr Deb on Saturday said he has submitted his resignation to Governor SN Arya, adding that the party wants him to “work to strengthen the organisation”. He made the announcement after meeting the Governor at the Raj Bhavan.

Being elected as Legislative Party Leader met the Hon'ble Governor at Raj Bhavan and submitted the claim to form the government with the letter of support from my party legislatures. pic.twitter.com/74GMKTv69H