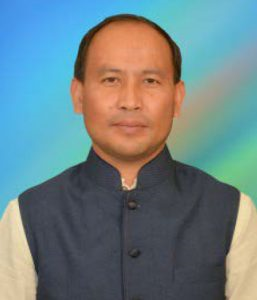 Imphal: BJP MLA of Keirao Assembly seat Shri Lourembam Rameshwor Meetei has been appointed as the Deputy chairman of State Planning Board with immediate effect.

Shri Rameshwor Meetei, was named by the Central Bureau of Investigation (CBI) in an alleged fraud case related to the Manipur University (MU),

In an appointment order signed by the chief secretary Rajesh Kumar, it stated that the deputy chairman of the State Planning Board, Manipur shall be paid such salary, conveyance allowances, travelling and daily allowances and shall be entitled to such amenities regarding residence, motor car as are provided for a Cabinet Minister, Manipur under the Salaries and Allowances of the Ministers (Manipur) Act, 1972 as amended from time to time and rules made thereunder.

In a chargesheet filed and submitted before the Special Judge under the Prevention of Corruption Act by the CBI, MLA Rameshwor and four others were named in connection with the International Guest House scandal at Manipur University.