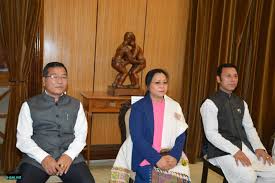 Chief Minister N Biren Singh on September 23 sent a proposal for dropping 3 cabinet minsters. They are V Hangkhalian, Nemcha Kipgen and Thokchom Radheshyam from the state Council of Ministers. Following the proposal, the governor announced acceptance of it in a statement on Thursday morning.

“I have accepted the dropping of the following ministers (mentioned above) from the Council of Ministers as proposed,” Najma said in the statement.

Interestingly, Nemcha Kipgen is the lone women in the council of ministers.