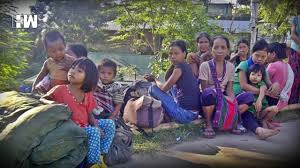 Agartala: At least 1 person was killed and several others were injured in North Tripura on Saturday when police opened fire after a protest allegedly turned violent. Hundreds took out to the streets opposing the Central government’s decision to rehabilitate thousands of tribal Bru refugees.

Demonstrators protesting against the rehabilitation of Bru refugees from Mizoram vandalise, and set fire to vehicles in Dolubari village of North Tripura district.

Over 32,000 Bru migrants have been living in six relief camps located in Tripura for over two decades after an ethnic clash in Mizoram in 1997. In January, the Centre signed an agreement with the governments of Tripura and Mizoram to resettle them and sanctioned Rs 600 crore package for the resettlement.

The indefinite strike against the Bru resettlement has been continuing for five days at Kanchanpur sub-division affecting normalcy in the neighbouring state. Violent incidents had also occurred on November 17 during the strike.

The shutdown has been in place since November 16.

Locals claimed that there might be more deaths. However, police were yet to confirm the claims.