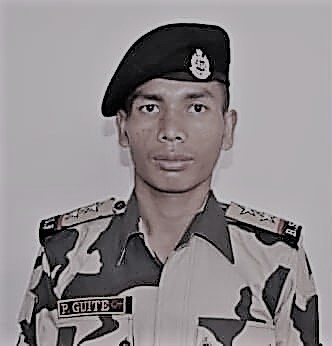 BSF Sub-Inspector Paotinsat Guite, who was deployed at FDL of BSF in Rajouri sector in Poonch district of Jammu and Kashmir, lost his life while displaying conspicuous acts of bravery by not only retaliating to the enemy fire but also by saving the lives of many of his colleagues.

Martyred SI P Guite had displayed the highest degree of dedication and devotion to duty and laid down his life in the line of duty, a statement issued by the BSF said. IG BSF Jammu, N S Jamwal said martyred sub-inspector P Guite was a gallant and sincere borderman. The nation will always remain indebted to him for his supreme sacrifice and devotion to duty.

According to reports, the mortal remains of the BSF Sub-Inspector will be sent to Imphal by air and then to his native place at Maphou Kuki village in Manipur’s Senapati district.

The last rites of the braveheart will be performed with full state honours in his village.

The sad news came on the day when the nation observed the 56th BSF Raising Day.

The BSF in its statement said the force stands in solidarity with his bereaved family.