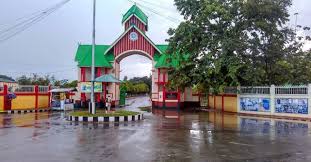 Imphal, December 9 2020: The Central Bureau of Investigation(CBI) today raided residence of Dr Naorem Sanatomba an Assistant Professor in Manipur University, Manipuri department along with the residence of a retired Commandant of Home Guards Manipur University SP Thaisi on charge of issuing “fake orders” for deployment of “fake home guards” at the university.

The CBI Anti-Corruption Branch (ACB) Imphal had registered a case against Security Officer of MU/Assistant Professor Dr N Sanatomba Singh and then Commandant, Home Guard, SP Thaisi on the allegation that they had entered into a criminal conspiracy to issue ‘fake orders’ for deployment of Home Guards at Manipur University.

SP Thaisi had issued 4 fake office orders on April 4, 2017 for deployment of Home Guards at MU and based on these fake orders, Dr N Sanatomba had deployed/engaged 24 fake Home Guards as security personnel at MU, said CBI.

Dr N Sanatomba had joined Manipur University as Assistant Professor in the Manipuri Department in 2008 and he has been also holding the charge of Security Officer, said sources.

The items seized from the official quarters of Dr N Sanatomba include files/documents relating to the deployment/engagement of home guards at MU (including the engagement of 24 fake Home Guards), documents showing purchase of .31 acre of homestead land at Langthabal, purchase of .625 acre and another .78 acre of agricultural land at Kanong, Konthoujam.