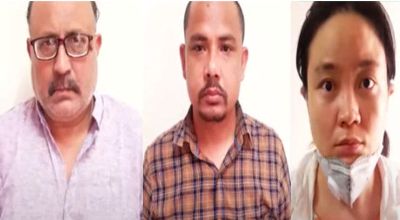 Rajeev Sharma, a freelance journalist was arrested by Delhi Police on for sharing crucial information about India’s border strategy and Army deployment to the Chinese intelligence agencies. Two more persons were arrested in connection with the case, Chinese agent Qing Shi and her Nepali Associate Sher Singh. They added a Chinese woman, Qing Shi, and a Nepalese man, Sher Singh alias Raj Bohra, have been booked along with Sharma under the Official Secrets Act after classified documents were recovered from their possession.

The Delhi Police today convened a press meet to reveal the details about the arrest and Sharma’s involvement in passing on the secret information to his Chinese handlers, Michael & George, based in Kunming, China, through different digital mediums. Special Cell DCP Sanjeev Kumar Yadav spoke at the press conference, claiming that Sharma was contacted by Chinese Intelligence agents in 2016 for carrying out spying for them.

He also added that Sharma was also in touch with some Chinese intelligence officer and had received Rs 40 lakhs in the last 18 months as he was being given $1,000 for passing on each sensitive information. The police official revealed that Chinese intelligence had tasked the journalist for conducting espionage activities in lieu of large amounts of money and luxury holidays.

Sharma, who was writing on defence-related issues for a few of the Indian media organisations, as well the hawkish Chinese state-affiliated media house Global Times, was arrested based on the inputs shared by the central intelligence. The police have recovered classified documents from him, the DCP added. The information conveyed were related to Army movements, Defence acquisitions, Dalai Lama, foreign policy etc.

Delhi police reveals that when Rajeev Sharma was writing for Global Times, he was spotted by Chinese intelligence, and he was approached by Michael from Kuming city through his LinkedIn profile. He had invited Sharma to Kuming for an interview in a Chinese media company, and the cost of his travel was paid by the Chinese. Michael and his junior Xuo had asked Rajeev Sharma to provide inputs on various aspects of Indo-China relations.

Sharma maintained contacts with Michael and Xuo between 2016 to 2018 through various means including emails and social media services. In January 2019, he met another Chinese person George, a General Manager at a Chinese media company. He had offered Sharma 500 USD for each articles on various topics related to Dalai Lama.

George had informed Rajeev Sharma that they will send him money through a company located at Mahipal Pur in Delhi, which is operated by Chinese woman Qing Shi. This company exports medicines to China, and in exchange, they receive money from China via legitimate means, which was used to make payments to their assets like Rajeev Sharma. Delhi police have informed that around Rs 40-45 lakh was transferred using this channel. Money was also being routed through hawala channels.

As per the interrogation by the police, Sharma had disclosed that he had provided information on issues like India-Bhutan-China trijunction including Doklam, Galwan Valley, Indian-Myanmar military co-operation, India-China boundary issues etc.

In January 2019, Sharma had come in contact with a Kunming based Chinese entity George. George had asked Sharma to write/inform about Dalai Lama related issues and was offered $500 per article/information. He had received more than 30 lacs from George in 10 instalments from January 2019 to September 2020, the police official mentioned.

The police official said that Sharma was assisted by a Chinese woman Qing Shi and her Nepalese associate Sher Singh, who had been arrested for allegedly paying huge sums of money to him through a web of shell companies. Sharma had disclosed in his statement that Chinese nationals Jhang Chang and his wife Chang-li-lia were running the companies MZ Pharmacy and MZ Malls, under the fake names of Suraj and Usha.

Reportedly, the Chinese woman named Qing Shi is an intelligence officer of the Ministry of State Security (MSS) of the Chinese government. The name of her Nepali Associate is Sher Singh. They were operating the espionage racket from Mahilpur and further investigation into the Chinese companies based in Mahilpur is in progress.

Further investigation is underway and forensic analysis of mobiles and laptops is under progress to unearth further details of the entire network and the conspiracy in the case.

Sharma was arrested by a special cell of Delhi police on September 14 under the Official Secrets Act. His Twitter account has been restricted following his arrest. Sharma has reportedly worked with The Tribune, Free Press Journal, Sakaal, etc. and for left-wing publications like The Quint, DailyO, etc. He also runs a YouTube channel.