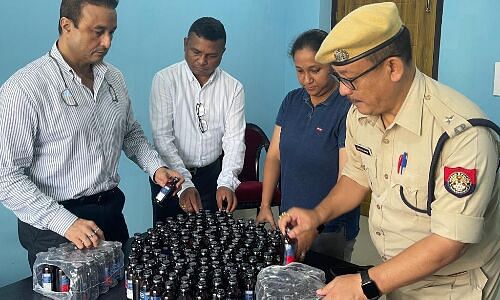 3 persons accused of transporting the illegal consignment who were part of an interstate gang have been busted along with the seizure of 30,000 bottles. The consignment was heading to Bangladesh and routed through West Bengal, Assam and Meghalaya and then the final destination circuit.

Assam police on Wednesday recovered heroin worth Rs 4 crore at Mariani in Assam’s Jorhat district and also nabbed a person in this regard.

The arrested person has been identified as Ajit Orang (30), the residence of Sarupathar in the Golaghat district. ”Based on specific information, police intercepted a vehicle at Heelekha on Tuesday and we found a couple of soap cases containing suspected heroin,” said an official.

”We investigated the vehicle on Wednesday morning and found a few more soap cases in hidden compartments,” the official added. According to sources, police suspect the seized heroin was transported from Nagaland to Jorhat via Karbi Anglong or Golaghat, as both districts share Nagaland’s borders.