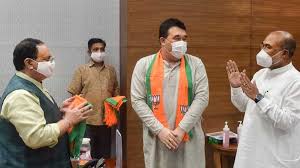 Five persons are likely to be inducted in the Council of Ministers.

The list of probable names who are likely to be inducted into cabinet are:

Current Speaker is likely to be replace by another non-BJP MLA.

In order to accommodate these 5 ministers  into the cabinet, Chief Minister N Biren will soon be asking for resignations from the from the existing ministers. Probable minister who will asked to resign from Council of Ministers are:

Out of the incumbent 11 Cabinet Ministers, five or six are likely to be replaced.

There are 12 Cabinet Ministers including the Chief Minister. They include four each from BJP and NPP, two from NPF and one from LJP.

Interestingly a resignation letter purportedly signed by V Hangkhanlian went viral on the social media today evening, but when contacted the MLA rubbished the viral post and added that he had not written any such ‘resignation letter addressed to anybody’ .