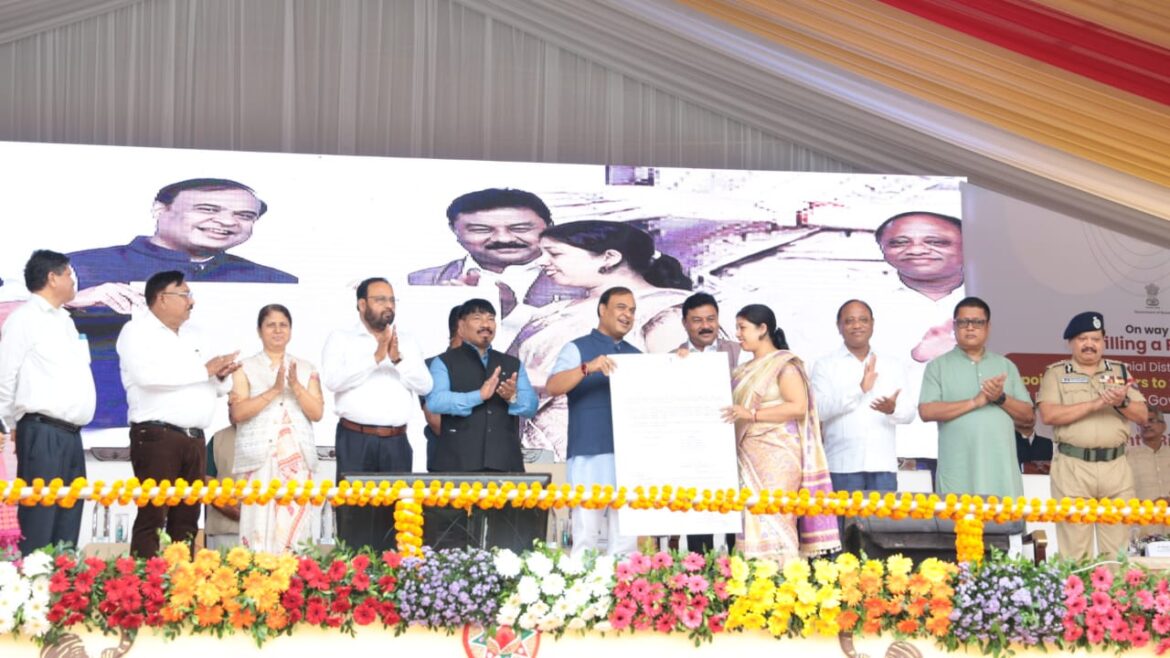 A total of 22,928 jobs were recruited in several Assam government departments.

Guwahati, May 14, 2022: Assam Chief Minister Himanta Biswa Sarma has said that a corruption free recruitment in Assam has been made possible only due to a combination of strong political will and honesty of officials.

A total of 22,958 candidates were given appointment letters to various posts under 11 Government departments . The Chief Minister said that no candidate had to pay a single penny to secure government jobs and all recruitment and appointment have been done on the purely on merit basis.

Himanta Biswa Sarma was addressing the gathering at a function at the Khanapara Veterinary ground here for ceremonial distribution of appointment letters.

Live from Ceremonial Distribution of Appointment Letters to 22,958 new recruits in 11th Depts of Govt of Assam from Kahanapara Field, Guwahati https://t.co/mqu5tZ2x0y

To root out corruption from recruitments, honesty must be maintained at all levels — from politician to bureaucrat to the junior clerk.
For this transparent recruitment process, my special gratitude to all Govt employees engaged in the whole exercise. pic.twitter.com/Bz1HwHHWXa

I can certainly and proudly say that this entire recruitment process is free from corruption. With more recruitments and job interviews in the pipeline, we are making good progress towards fulfilling our promise of providing one lakh jobs. pic.twitter.com/HGZaTtJTLl

Sarma said “Assam government have taken an important step towards eliminating corruption in appointments in Government departments by giving jobs to youths in a totally transparent manner. Therefore, I appeal to all newly-appointed youths not to seek any favour or gratification from anyone during their service careers. Don’t run after extra income over and above your salary,”

He also urged newly-appointed police personnel to be tough against and criminals and ‘soft’ towards poor people.

The Chief Minister said that since 2011 he has been following the principle of not yielding to political pressure thus ensuring transparent and fair recruitment . He reminded that honesty on the part of Government employees is a must to ensure clean recruitment processes.

“People’s confidence can be won only if the recruitment process is transparent and fair, otherwise some doubt persists in the public perception,” Sarma added .

Sarma also said that the process has now started for fulfilment of the electoral commitment of providing one lakh jobs within the first year of the Government’s tenure. He said another 8,000 youths will be provided with jobs by July 2022.

“Our Government’s first priority is to gradually get rid of corruption from various departments and I hope that the newly-appointed youths will cooperate in achieving this goal,” the Chief Minister said.

Today, 8,867 candidates received appointment letters under the Home Department, 8,063 in the Education Department, 2,419 in Health, 330 in Public Health Engineering, 105 in Water Resources, 69 in Social Welfare, 55 in Agriculture, 23 in Forest, 17 in Labour Welfare, 8 in PWD and 2 in the Mines and Minerals Department.