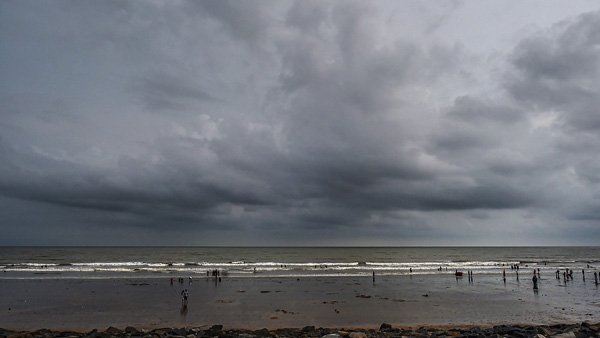 New Delhi, May 10: Severe cyclone Asani is likely to hit the Andhra Pradesh coast between Kakinada and Visakhapatnam, India Meteorological Department (IMD) said on Tuesday. The weather department has issued a “red” warning for the Andhra Pradesh coast, which implies that local authorities need to take action to prevent disasters associated with the cyclone.

“Asani is moving towards the Andhra coast. A red alert has been issued for Andhra. It is expected to reach the west-central Bay of Bengal close to Kakinada or Vishakhapatnam by morning,” said Sanjeev Dwivedi, Scientist IMD.

“Its recurve is possible after morning. It will then come towards the Odisha coast. Heavy to very heavy rainfall over Odisha is expected,” he added.

The cyclone, which was moving at 5 kmph in the morning, gained speed to 25 kmph later in the day, as it lays centered around 210 km south-southeast of Kakinada in Andhra Pradesh and 530 km south-southwest of Gopalpur in Odisha, according to the latest bulletin issued at 4.30 PM.

The system is expected to recurve on Tuesday evening and move parallel to the coast in the north-northeast direction. IMD Director General Mrutunjay Mohapatra said that cyclone Asani has already achieved maximum stage of intensification and is gradually getting weakened.

“After nearing the Andhra Pradesh coast in the evening, the system will change its course and move off and along the Odisha coast,” he said. Mohapatra said that the severe cyclonic storm will weaken into a cyclonic storm on Wednesday and turn into a deep depression on Thursday.

The MeT Department has warned fishermen against venturing into deep sea till Thursday, as Odisha braced for heavy rain in the coastal areas. Rainfall was recorded in Ganjam, Puri and Khurda on Tuesday morning.

This post is from a syndicated feed and it has been published WITHOUT any EDITING except for the HEADLINE.