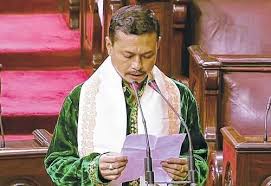 Imphal, February 04 2021: Rajya Sabha MP Leishemba Sanajaoba today moved a Special Motion on the 7th day of the Parliament session to declare “Kangla”, the ancient capital of the kingdom of Manipur a world heritage site.

Raising the special motion, Leisemba Sanajaoba said Kangla is Manipur’s oldest capital and it symbolises the origin of the Manipuris.

He added that more than 70 kings had ruled the kingdom of Manipur before it was conquered by the British on April 27, 1891 .

He added that British officers had documented the existence of proper buildings and monuments at Kangla. The structures were ruined during the Anglo-Manipuri War of 1891 as per records, added the MP.

Leishemba Sanajaoba also drew the attention of the House to the fact that the well-known modern Polo game originated from Manipur.

He added that the game of polo was then known as “hockey on horseback” by the British and the then Viceroy of Colonial India Lord Curzon called it the “Cradle of Polo”.

Asserting that the oldest Polo ground of the game is still inside the Kangla Fort, Leishemba Sanajaoba moved the House to declare Kangla a world heritage site.

It may be mentioned that, Leishemba Sanajaoba had tabled to enlist Manipur language as a classical Indian language on his first attendance of the Parliament Session and authorities concerned have started necessary measures for the same.