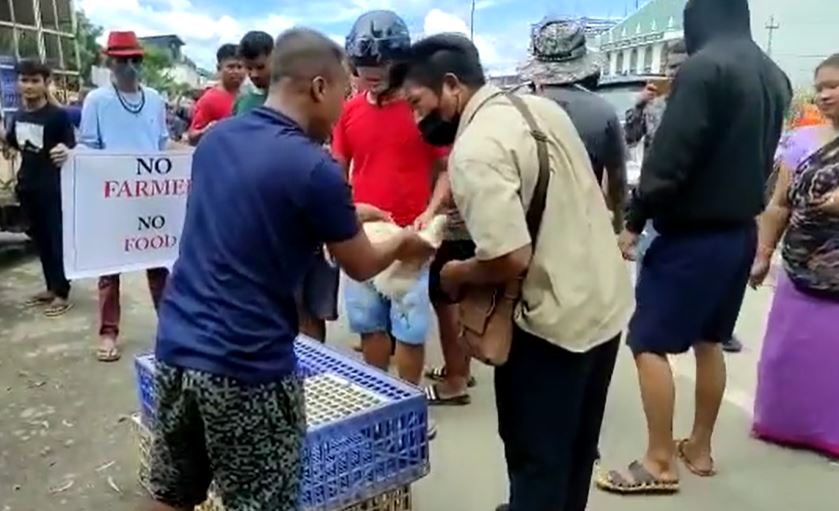 Imphal, 8 Aug 2022: Poultry farmers protesting ATSUM led National Highway blockade in Manipur had a unique form of protest by distributing the reared livestock for free to commuters in the heart of Imphal city. The development came after farmers bear heavy losses due to unavailability of the feeds for the livestock. The supply of livestock feeds were disrupted due to ongoing Imphal-Dimapur highway blockade in Manipur led by ATSUM.

Group of farmer’s rearing livestock rearing on Monday staged a protest at the Mao-Imphal Market, Kabaw Leikai of Imphal West district condemning the ongoing National Highway blockade in Manipur and distributed their reared livestock to commuters for free.

The economic blockade has created scarcity in livestock feed and thus disrupting them in their farming activities due to non-availability of feeds for the livestock, the farmers said while distributing their reared livestock to commuters.

Poultry farmers said that economic blockade has hit the people hard such form of agitation demotivates those farmers and makes them feel that livestock rearing is not a suitable option for the state.

Moreover, the ongoing economic blockade has obstructed the import of feeds which is like a torture to all livestock and instead of letting them die to hunger, it is better to distribute them to the people, he added.