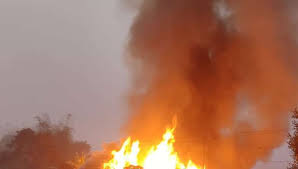 Kohima, Jan. 13,2021 :  Residents of Lower Officers Hill colony in Kohima, Nagaland’s capital woke to a loud noise cause due to LPG blast after a fire incident . The surrounding areas were woken up by the tremors caused by the sound of LPG cylinder blast due to a major fire incident, in the early hours of Wednesday.

The officer in-charge of South Fire Station, Lhouliebeizo Angami, informed that a call was received at 1:04 am and an operation team was mobilised to douse the fire.

A storeroom, LPG cylinders and one RCC building’s walls and windows at the vicinity of the incident were partially affected by the fire.

Property worth approximately INR 1,60,295 was destroyed. However, no casualty was reported.

The cause of the fire was unknown till the time of filing this report.