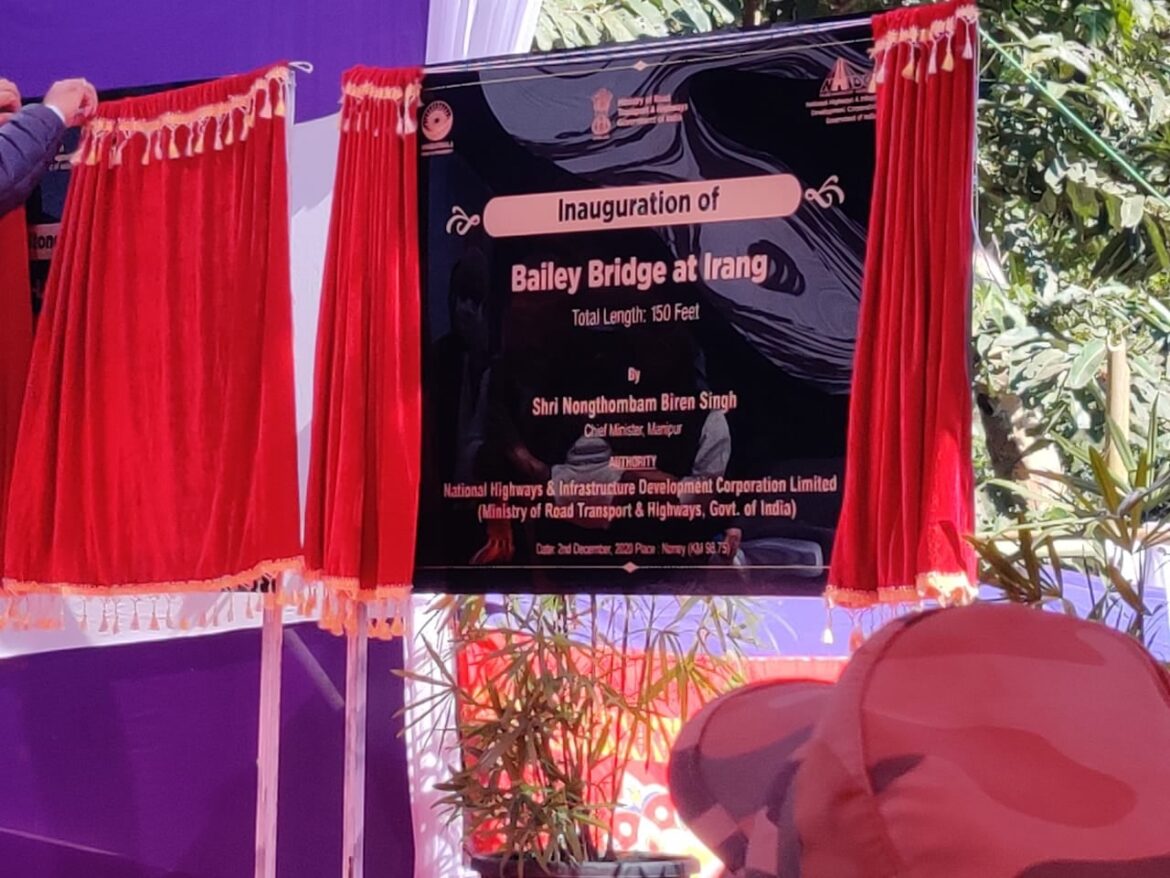 Irang concrete bridge will be constructed by NHIDCL. The bailey bridge which collapsed on November 1 had cut-off the second lifeline of Manipur for nearly 32 days. The bailey bridge was assembled by the 52nd Engineering Regiment of the Indian Army in coordination with NHIDCL and the State Government.

N Biren said, earlier the State mainly used to rely on NH-2 (Imphal-Dimapur road) for supply of essential items as NH-37 (Imphal-Jiribam road) was not in a good shape. However, NH-37 has improved a lot in the past few years and now serves as the second lifeline of the State, he added.

Regarding the unfortunate collapse of Irang Bailey Bridge on the highway on November 1 this year, he informed that the State Government worked day and night in finding ways to restore it as soon as possible.

The State Government worked in coordination with 57 Mountain of the Indian Army led by Col Shashikumar and NHIDCL to reconstruct the bridge as soon as possible. During the reconstruction process, the bridge collapsed again.

However, the tireless efforts of the 52nd Engineer Regiment of the Indian Army and NHIDCL, successfully reinstalled the bridge within a short span of only one month, he added.

Lauding the efforts of the Indian Army in this regard, the Chief Minister announced a reward of Rs 5 lakh with commendation certificate to the 52nd Engineering Regiment for the good work done for the people of Manipur.

He also assured to personally write to the Union Ministry of Defence to appreciate the Regiment. The Chief Minister stated that he had also requested the NHIDCL to complete Makru and Barak concrete bridges by mid-January next year and Irang bridge by December next year.

Once these three bridges are completed, the problems of bridge collapse will not exist along this stretch and the economic life of people on the highway will also improve.

The Chief Minister also expressed gratefulness to Prime Minister Narendra Modi for his concern about Manipur and the North East.

On the Rs 3000-crore Manipur Water Supply Project under the Jal Jeevan Mission – Har Ghar Jal Scheme, he assured that the Government is taking up concerted steps to provide tap water to every household of the State.

He further said that after the completion of the tender process, the work had been awarded to an agency.

He appealed to the people to extend support during the construction of the bridge and come up if there is any grievance and problem.

He also assured that grievances brought up by the villagers regarding land compensation will be looked into and will try to address it soon.

Stating that good communication and transportation is key to development, the State Government has been giving prime focus on revamping of NH-37 .

The Chief Minister informed that after the formation of the new Government in the State, footfall of foreign tourists has increased to over 10,000 per year as compared to around 400-500 per year earlier and that Noney, which is the site for the highest railway bridge, will become a tourist spot.

Informing that the Government will start convening Cabinet meetings in different hill districts soon, the Chief Minister said that development works would be reviewed in these meetings.

He also requested the people to submit their grievances in advance before Cabinet meetings are held in their district headquarters.

In his speech, Awangbow Newmai said that the Chief Minister has a strong determination to build concrete bridges on Imphal-Jiribam road.

He also urged the public not to disturb the National projects in their pursuit to fulfill a demand.

The Minister also urged the public to extend cooperation in taking up developmental works.