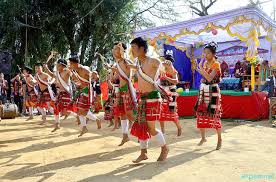 Imphal, February 09 2021: Kabui Samiti Manipur said this in a statement today and said the Zeme community has ‘Hega Ngi’ and Liangmei has ‘Chaga Gadi’ festivals and the Kabui always had ‘Gaan Ngai’ .

Reacting to the claims published in local dailies claiming ‘Gaan Ngai’ to be the festival of Zeliangrong Tingkao Ragwang Chapriak (TRC) is an attempt to vilify the existence of Kabui community.

It also added that the Kabui community has been in existence since time immemorial as made evident by the ‘Moirang Kangleirol’ and every other community in question had been enjoying the benefits of ST category provided to Kabui in 1950 .

Kabui Samiti Manipur sought clarification from Maibon Phaomei on the statement he made recently, which claimed that ‘Kabui’ is a word coined after 2000 by some group of people and there were no Kabui community before that.

This can be taken as a rejection of history and the Constitution of India and calls for legal action, added the statement.

The statement added, Kabui Samiti Manipur has been working towards protection, preservation and welfare of the Kabui community since the inception of the samiti in 1934 and will continue to do so in the face of any adversity and urged the people of Manipur to support the cause.