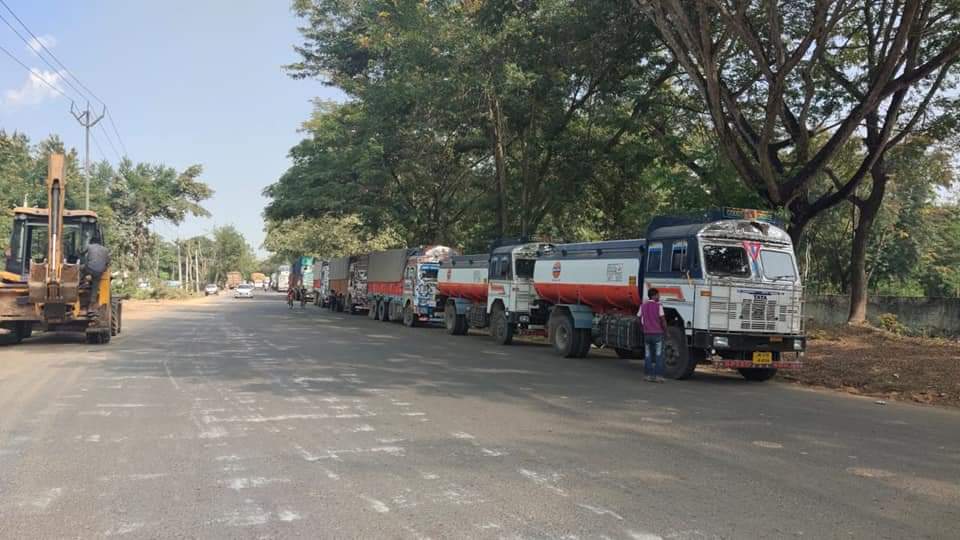 Mokokchung Dec. 2, 2020: As the ongoing economic blockade imposed on National Highway NH-702D by Assam-based organisations has badly hit the supply and economic activities on the 7 districts of Nagaland. The economic blockade over the Nagaland-Assam border dispute has hit traders of Nagaland’s seven districts viz. Mokokchung, Tuensang, Wokha, Zunheboto, Longleng, Noklak and Kiphire. The traders have asserted that they will find an alternative to carry out trade by looking beyond Jorhat and upper Assam.

Trade unions of 7 impacted districts in a joint press release on Wednesday, the traders stated that they have been ‘minutely observing the situation in close co-ordination with the respective district authorities ever since some Assam-based organisations imposed an economic blockade by restricting the movement of vehicles along the National Highway 702D at Mariani under Jorhat district of Assam’.

While appreciating the efforts being made to resolve the issue, they stated that the problem is not over yet and the Assam-based organisations imposing the economic blockade at Mariani appeared to have failed to comprehend the reality of the situation. They added that the Assam-Nagaland border row is can never be resolved by economic blockades as it is “exacerbated by historical wrongs”.

They claimed that economic blockades will only strain the age-old ties between the people of the two neighbouring states, thereby making it impossible to make room for any meaningful discourse to resolve the contentious border issue.

The border dispute between Assam and Nagaland is sub-judice with the matter pending verdict in Supreme Court of India, the pointed out, adding that ‘forceful obstruction of National Highways and restricting movement of essential commodities are not only illegal but also flagrant violations of human rights’.

They claimed that the government of Assam and the authorities, there are very well aware of these glaring facts and ‘they are duty-bound to uphold rule of law.’

While admitting that the ongoing economic blockade has affected the seven districts of Nagaland as they are almost entirely dependent on the markets of upper Assam, with Jorhat in particular, for trade and commerce, the business communities said it is affecting its counterparts in Assam too. They added that the blockade is not going to starve them and won’t submit to the whims of some organisations.

“If the economic blockade is not lifted soon, it is apparently clear that the business community including traders and farmers in upper Assam would confront those reprobates imposing the illegitimate and meaningless blockade at Mariani,” they claimed.

They also appealed to ‘peaceful and right-thinking citizens of Assam, the government of Assam, the authorities at Jorhat and the business community of upper Assam to intervene and persuade those responsible for this pathetic drama to lift the economic blockade’.

“It is unfortunate that a few individuals with vested interests have taken to ransom the people of the two neighbouring states. Let good sense prevail and ensure that local assembly constituency political interests do not sever the cordial ties between the two peoples enjoyed since time immemorial,” they stated.