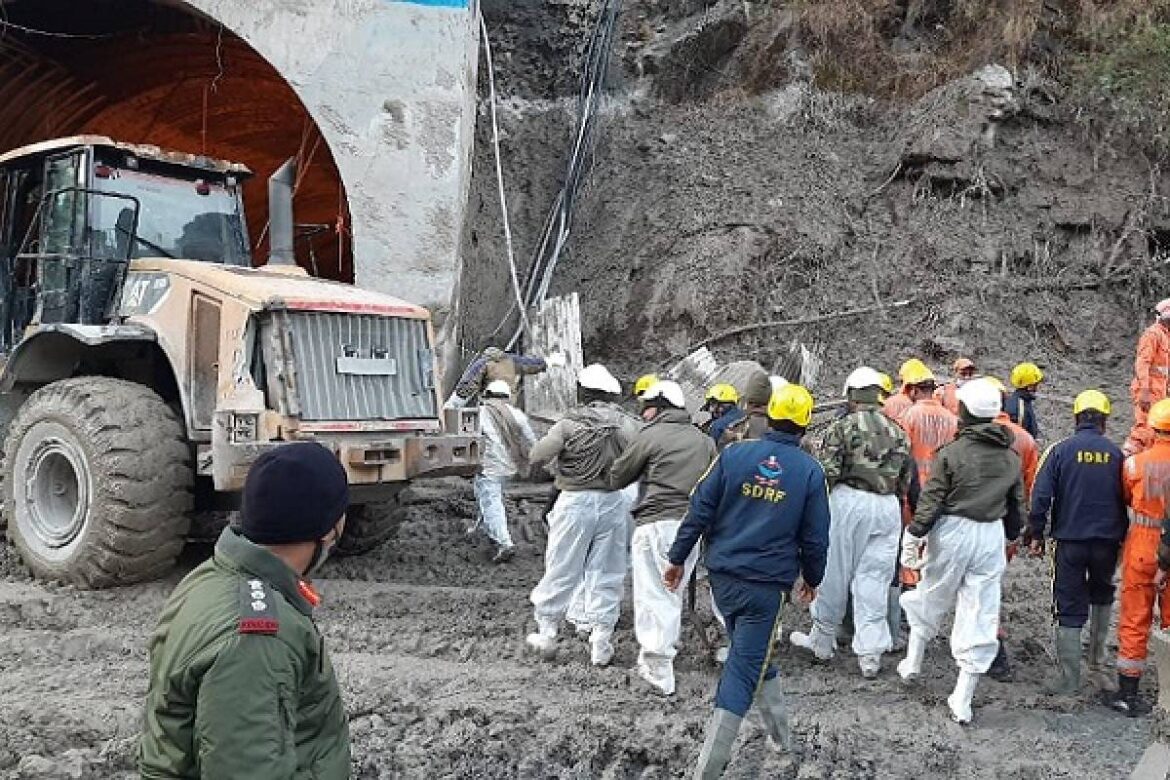 Yesterday (7 February), tragedy hit the fragile ecological region of Uttarakhand when a glacier sheet broke away In Chamoli, triggering a massive flood in Dhauli Ganga, Rishi Ganga and Alaknanda rivers.

As waters came rushing in, the houses on the riverside were submerged. Boulders and debris carried by the water washed away the Raini power project causing a massive impact on Tapovan.

Two power projects — NTPC’s Tapovan-Vishnugad hydel project and the Rishi Ganga Hydel Project — were extensively damaged with labourers getting trapped inside the tunnels.

Currently, as per latest reports, around 203 people are missing and 11 dead bodies have been recovered. Owing to the rapid water flow, bodies are being recovered far away from the incident site. Some are trapped in deep areas and tunnels.

The disaster response started at around 12 pm yesterday. The State Disaster Response Force (SDRF) and the local administration quickly reached the spot within 15 minutes of the disaster.

Chamoli district magistrate and the superintendent of police reached the spot and instructed officials to evacuate people living in villages on the bank of Dhauliganga river.

By 12.30 pm, people were being evacuated from the areas near Alkananda. As a precautionary measure, flow of Bhagirathi River had been stopped, and to prevent the flow of water of Alaknanda, Srinagar Dam and Rishikesh Dam was emptied. SDRF was on alert, and Chief minister Trivendra Singh Rawat said he was leaving for the region.

The ITBP forces were in the area before 1 pm. They immediately got in touch with the NTPC management to get an estimate of the number of persons trapped at the site. The personnel also assessed the damages in Tapovan region.

Before 2 pm, over 200 ITBP jawans were on the job and working in collaboration with local administration. One team was deployed to assess the situation, and another was deployed near Joshimath to raise awareness and evacuate people. Vivek Pandey, ITBP Spokesperson said that the situation was under control.

They carried rescued persons on stretchers to the nearest road, and all 16 people who were trapped in a tunnel near Tapovan in Chamoli were rescued by ITBP and shifted to safer places by the Uttarakhand police before 3.30 pm.

SDRF and NDRF teams had also reached the spot before 2.30 pm. Three choppers including two Mi-17 and one ALH Dhruv chopper of Air Force were stationed in Dehradun and nearby areas for aiding the rescue operations in flood-affected areas.

Before 3 pm, four Army columns, two Medical teams, and one Engineering Task Force had been deployed and Army helicopters were on an aerial recce. Uttarakhand CM Trivendra Singh Rawat reached the site near Reni village in Tapovan area of Chamoli and took stock of the situation.

Before 6 pm, two C-130J Super Hercules aircraft carrying three companies of National Disaster Response Force and 15 tonnes of equipment had been dispatched from Hindan airbase in Ghaziabad. An Air Commodore-rank officer was deployed at Jolly Grant by Air Force as Task Force commander to coordinate aerial effort for rescue operations.

At 7 pm, Uttarakhand Chief Minister informed in a press conference after visiting the affected region that the Indian Army had reached the spot, more teams of NDRF that had reached Dehradun were en route and doctors had already set up camps. A team of 60 SDRF personnel with equipment was already involved in the rescue and relief operations.

Out of the two clogged tunnels, the bigger 180 metre tunnel was cleared by 70 to 80 metres till 9 AM today. At least 12 workers have been rescued so far. The up-slope nature of the tunnel is making the operation more challenging.

The second tunnel which is approximately 3-km long is currently being cleared and we can soon expect some positive results. The ITBP PRO informed that the teams will also be carrying out night operations.

As per latest reports, around 34 people are trapped inside the second tunnel. “We’ve been able to access up to about 70 metres inside the tunnel, we’ve to further move for about 180 metres. Communication has not been established yet,” Union Minister of Power and New and Renewable Energy, RK. Singh said.

The operations are an example of successful multi-agency cooperation, each deploying its own expertise.

Reportedly, after tireless efforts of Army personnel, including Engineering Task Force, the mouth of the tunnel was cleared. Work continued throughout the night with the help of earthmovers, generators and search lights. The field Hospital, meanwhile, is providing medical aid at the site.

On the other hand, Border Roads Organisation (BRO) carried out road clearance operation and the Rishikesh-Joshimath-Mana road which was blocked at Hathipahad due to the flash flood in Dhauli Ganga was reopened for traffic by late afternoon yesterday. Several BRO teams continue to be in the area for relief operations.

The centre-state coordination was also effective and swift which led to quick deployment of the forces under different jurisdictions.

“We are constantly receiving directions from the Centre with Prime Minister Narendra Modi keeping track. Home Minister Amit Shah also reviewing the situation in every half an hour,” Union Minister Ramesh Pokhriyal Nishank was quoted as saying.

Carrying out the rescue operations is a challenge due to the tough terrain of the region which poses accessibility issues. Another challenge is the debris brought down by the water which needs to be cleared.

The increased water level in the rivers also posed a challenge. The rescue work had to be halted for a while due to the rise in water level.

The government, therefore, brought the airpower in the picture fairly quickly. For example, by road, only two teams could manage to reach Joshimath, therefore, the remaining teams were airlifted.

Heavy excavators being brought in to remove the debris and slush.

A team of scientists along with their specialised equipment belonging to the Snow and Avalanche Study Establishment (SASE) of the Defence Research and Development Organisation (DRDO) were flown to Dehradun the same day. They are carrying out surveillance and reconnaissance in the Joshimath area today. An ALH is tasked for the purpose.

The Central Water Commission was also monitoring the situation and said that the river Alaknanda at Srinagar in Pauri Garhwal is flowing much below warning level as the impact of Glacial Lake burst is felt only up to Joshimath.

PM Narendra Modi has approved an ex-gratia of Rs 2 lakh each from PMNRF for the next of kin of those who have lost their lives and Rs 50,000 for those seriously injured. The Uttarakhand state government will give financial assistance of Rs 4 lakh each to the kin of the deceased.