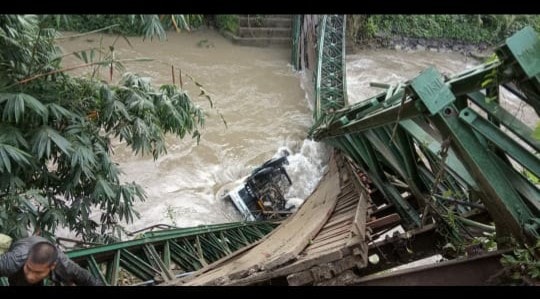 The body of Phoukeishangbam Khamba, driver of the ill fated truck who fell into Irang River as the bailey bridge snapped has been sent to his native village of Baluhandar in Hojai district of Assam.

The body of Khamba was recovered from Khoupum area yesterday(Nov 4) and post mortem examination was done at JNIMS mortuary today.

All Manipur Road Transport Drivers and Motor Workers Union general secretary Maimom Anil said that transporters paid their last respects to the body of Khamba before it was sent to his native village in an ambulance.

He said that the TDC and the Drivers’ Union are bearing all the expenses of hiring the ambulance. As announced earlier by the TDC, a team of TDC would visit the bereaved family of Khamba and hand over monetary assistance of Rs one lakh before the shradha ceremony.

Following the collapse of Irang Bridge, a large number of vehicles are still stranded at different points of Imphal-Jiribam highway.

Even though some vehicles have been taking Rengpang-Khoupum-Bishnupur road, this road is also extremely bad.

Vehicles often get stuck on the muddy road and they have to be pulled up using excavators. If trucks should take the particular road, they should make their loads much lighter otherwise it is very risky, Anil said.