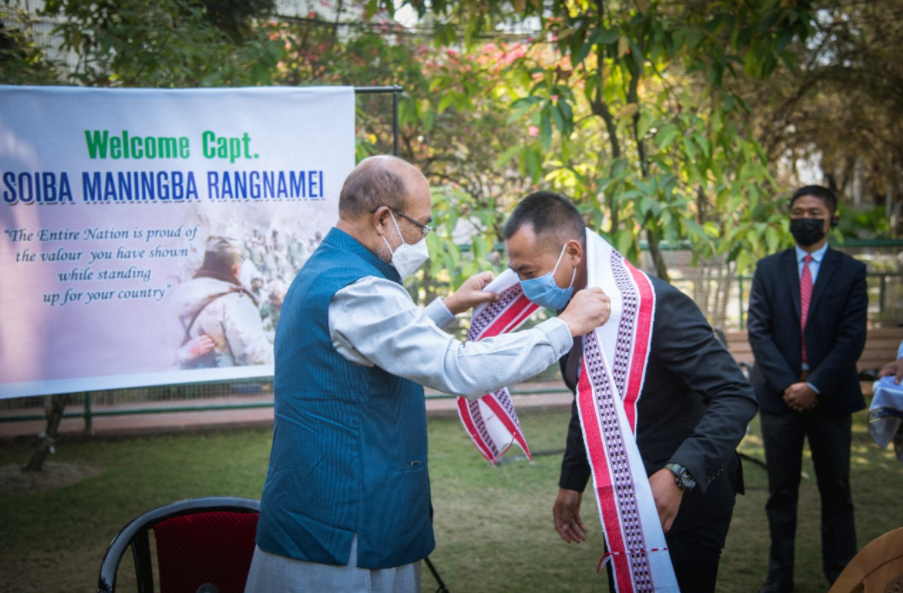 Imphal, Feb 23, 2021: An Indian Army officer who led the troops of 16 Bihar Regiment and daringly confronted the Chinese PLA during a clash in eastern Ladakh’s Galwan last year has been felicitated by Manipur government on Tuesday (23 February).

“Felicitate Captain Soiba Maningba Rangnamei from Senapati Dist, Manipur of 16 Bihar Regiment who led his men during the Galwan confrontation, at my official residence today,” Manipur CM Biren Singh said in a tweet.

It's an honour to meet Capt.Soiba Maningba Rangnamei from Senapati, Manipur of 16 Bihar, leading his men in Galwan during the confrontation against the Chinese PLA.
We are always indebted to soldiers like him who is leading in the front for the safety and security of the Nation. pic.twitter.com/QsbxI0zo64

He added that the youth of the state were always encouraged by the government to join the armed forces and participate in safeguarding the nation.

It should be noted that Captain Soiba Maningba Rangnamei of 16 Bihar Regiment had appeared in a purported video of Galwan clash that was released by China, in which he could be seen leading the soldiers and daringly confronting the Chinese troops during a clash with Chinese People’s Liberation Army (PLA).