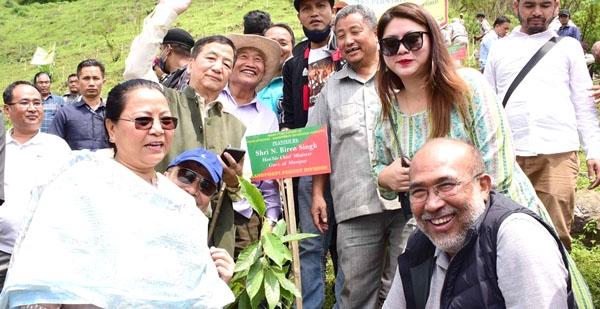 Kangpokpi, May 28 2022: Chief Minister N Biren has said that Indigenous Kukis are also bonafide citizens of India and we should not let any external influence ruin the peaceful coexistence among various communities of the State.

We should prevent illegal migrants from settling among us” the Chief Minister asserted.

The Chief Minister was addressing a gathering after a ‘Mass Plantation Drive’ organized by the Forest Department at Kanglatongbi- Kangpokpi Reserved Forest areas today.

It is the second time such a plantation drive is organised in the area. Biren also appealed to all people and stakeholders to protect the reserved forests and added that one should plant trees at villages and inhabited areas too.

He said that no Government can function without the support of the people, he asserted that cooperation from the people of Manipur is a must for good governance in the State. He also expressed disappointment on construction of roads within the reserved forest areas. N Biren stated he was really surprised at why the Forest Department and the Government officials didn’t stop such constructions which eventually helped timber smugglers with ease of access.

On the rise in hate speeches on various social media platforms, Biren reiterated asked to stop such activities immediately since it has potential to create communal tension among the different communities of Manipur .

Maintaining that it is human nature to access the nearest available resources, he appealed to the Forest Department and the Deputy Commissioners to identify and classify areas such as reserved forests, protected forests, etc and restrict human activities in such areas as per relevant laws.

The Chief Minister thanked Minister Nemcha Kipgen, Forest Department and local bodies for organising such a plantation drive and added that it needs involvement from all sections of people.

Expressing satisfaction on the overwhelming support extended by almost all the communities of the State to the Government’s war on drugs campaign, Biren said that it is with the support of the people the Government is marching towards completely uprooting drug menace and stopping poppy plantations in the State.

Stating that he is not against any community, the Chief Minister added that he is against deforestation, corruption, poppy plantation and drug trafficking.