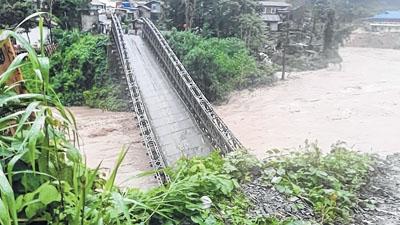 Imphal, May 12 2022: The Irang bailey bridge washed out today around 1.30 PM due to heavy rains cutting off the vehicular traffic along the Imphal-Jiribam NH-37.

Sources said that Irang bailey bridge along the NH-37 (Imphal – Jiribam road) near Taubam Village in Noney district collapsed due to fast flowing flood and soil erosion of the retaining wall. One side of the bridge sank after the soil below the retaining wall supporting the bridge was washed away by the flood. Several loaded trucks are lying stranded after the highway was cut off.

District Magistrate Noney has issued an order prohibiting plying of all vehicles through the National Highway-37 across Khongshang to Noney stretch immediately due to the collapse of Irang bridge. The alternate route via Khoupum to Rengpang may be used instead, however, it advised the heavy vehicles to refrain from taking the route due to the rugged, narrow terrain. Only light vehicles may use the road and for emergency purposes.

Construction and maintenance of Imphal-Jiribam Highway (NH 37) is done by National Highway Infrastructure Development Corporation Limited (NHIDCL) which is a public undertaking of the Government of India.

Nonetheless, some PWD engineers said that it was not snapping of the bridge but sinking of one of the bridge’s foundations which made the bailey bridge slanted and twisted.

All types of vehicles were prohibited from crossing the bridge since this morning and it averted accidents/casualties, the source added.

Meanwhile, Works Minister Govindas Konthoujam said that the Government has been communicating with NHIDCL to repair Irang bridge so as to restore traffic along the highway as soon as possible.

As Irang bridge has sunk, vehicles may take Old Cachar Road (Tongjei Maril) even though heavy loaded vehicles may damage the road for its bitumen lay is not thick enough, Govindas said.

He then appealed to all the drivers/transporters to take Old Cachar Road even if the road is damaged.

Vehicular movement has been affected on many roads in Noney and Tamenglong districts due to landslides/mudslides triggered by heavy rainfall and subsequent rise in the water levels of Barak, Makru, Irang, Ijei, Iril and Leimatak rivers.

Imphal-Tamenglong road has been cut off by mudslide at T Waichong.

On the other hand, Transport Director Dr Nivedita Lairenlakpam issued an order yesterday whereby movement of loaded vehicles in excess of the maximum gross vehicle weight of 24 MT is prohibited from crossing the distressed Motbung bridge along Imphal-Kohima highway.