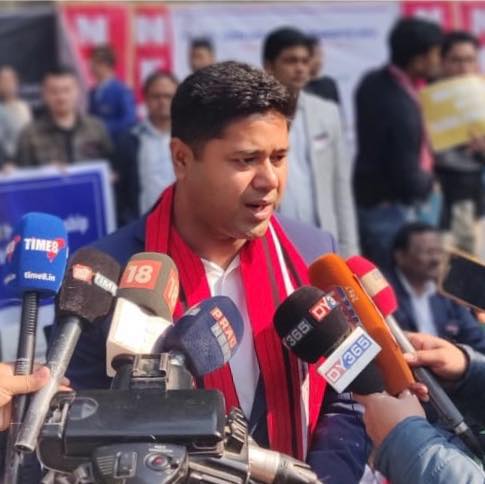 Guwahati: Lurinjyoti Gogoi, president of Asom Jaitya Parisad (AJP), on Thursday announced that AJP will forge alliance with Raijor Dal for the Assam Assembly election due in April-May this year.

Both the newly floated party have taken an anti-BJP and anti-CAA stand, relying heavily on a united regional front to take on the big guns during the upcoming assembly polls.

Lurinjyoti made the announced after he met Raijor Dal president Akhil Gogoi at Gauhati Medical College and Hospital (GMCH), along with AJP secretary Jagadish Bhuyan. They went to take stock of Akhil Gogoi’s health condition.

Meeting the jailed KMSS leader at the hospital, who is under treatment, Lurinjyoti said that he supported the proposal of Raijor Dal for alliance with AJP.

Speaking to the media Lurinjyoti Gogoi said, “After the meeting with Akhil Gogoi, we have finalised the alliance between AJP and Raijor Dal. Though we will announce this officially but I want to make the announcement to the public of Assam that AJP and Raijor Dal will together contest this election.”

“This time there will be people’s government and no one can stop us,” he further added.

On January 17, 2021, Raijor Dal proposed AJP for alliance through an official letter to defeat Bharatiya Janata Party (BJP) in election.

Both the parties are offshoots of the anti-Citizenship Amendment Act (CAA) protests that rocked the state in December 2019 and claimed five lives.

While AJP was launched by student organisations All Assam Students Union (AASU) and Assam Jatiyatabadi Yuba Chatra Parisad (AJYCP), Raijor Dal was formed by Krishak Mukti Sangram Samiti (KMSS), a farmers’ body led by activist Akhil Gogoi who is in jail since December 2019 for his role in anti-CAA protest.

Meanwhile, BJP is likely to continue its alliance with Asom Gana Parisad (AGP) and have a new tie-up with the United Peoples’ Party Liberal (UPPL), which is leading the ruling coalition in Bodoland Territorial Council (BTC).

On the other hand, the Congress, which lost two of its sitting MLAs to BJP last month, is yet to formalise its alliance with All India United Democratic Front (AIUDF).