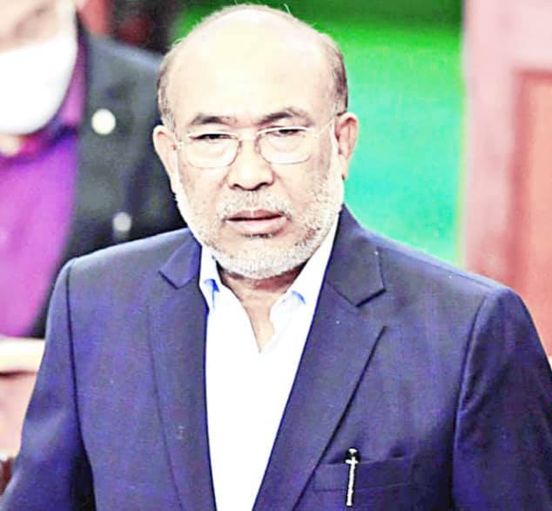 Imphal, February 04 2021:
The Budget session of the Manipur Legislative Assembly today passed the motion of thanks on the Governor’s address that was delivered at the House yesterday.

The discussion on the motion of thanks on the Governor’s address was moved by MLA P Sharatchandra Singh and seconded by MLA Dr Sapam Ranjan Singh.

Moving the motion of thanks, MLA P Sharatchandra said the Governor’s address to the House had clearly mentioned the challenges the Government faced successfully and many innovative and inclusive programmes taken up and planning to take up for welfare of the people.

On the other hand, Opposition Member MLA Govindas Konthoujam stated that the Governor’s address to the House was “very decorative” and it lacked budget related information.

The address failed to mention how the Government is going to support many who have returned to the State after leaving their jobs in other cities due to the COVID-19 pandemic.

Therefore, the Governor’s address lacks direction and proper vision, he said, suggesting amendment of the address.

Stating that the Armed Special Powers Act may be further removed from some Assembly Segments, MLA K Ranjit questioned why the Governor’s address failed to mention any possible removal of the AFSPA.

The Governor’s address also did not mention key issues related to the Anti-Corruption Cell, Manipur Conservation of Paddy Land and Wetland Act 2014.

Accommodating all the details would make the Governor’s address voluminous, however it touched the key themes of all the spheres, he added.

Niti Aayog has recommended Rs 1400 crore to save Loktak Lake

Replying to the queries raised by the Opposition MLAs, Chief Minister N Biren said in line with conserving the environment, the Niti Aayog has recommended Rs 1400 crore to save Loktak Lake under a comprehensive plan.

These three projects would be funded by the Asian Development Bank, he added.

The Dolaithabi and Thoubal Multipurpose projects have been completed while the Civil Secretariat project is still pending due to a Court case.

The project will commence after the final judgement of the Court, he said.

The Chief Minister also informed the House that the Anti-Corruption Cell is functioning smoothly, but this has been replaced by the Vigilance at present.

He stated that the public and officials should work sincerely and avoid indulging in corruption in Government recruitments.

“We can take appropriate action if we have proof and evidence of any corruption in the recruitments,” he said.

Further, the Government is taking up measures to repeal AFSPA as the law and order situation has improved considerably.

However, incidents of lobbing hand grenade at the Governor’s residence and other violent activities are hindering the processes to repeal the law, he said.

N Biren also said that the Manipur Conservation of Paddy Land and Wetland Act 2014 requires amendment and as such it will be produced in this session.

30-40 percent of the forest areas in the hills have been deforested.

Even as the Government and its agencies are destroying poppy plantations, the owners of these plantations couldn’t be identified as the estates have no pattas (land deed documents), he said, adding that the Government is taking up efforts to increase green cover in the hills.

Also, youths who have returned to the State due to pandemic may apply for the Start-Up scheme.

The Start-Up scheme aims to generate employment and cater to the needs for around 40,000 to 45,000 youths.

Rs 47 crore has been earmarked in the budget for the scheme, he said.

The Cabinet has also given approval to hold the elections to the Autonomous District Councils (ADCs).

There are 27 blocks functioning properly at the grassroots level.

Welfare of the people living in the hill areas is one of the top priorities of the Government and is included in the Manipur Vision Document 2030, he said.

The Committee on delimitation has sent the necessary documents for conducting delimitation.

On the peace talk between the NSCN (IM) and the Government of India, N Biren said his Government is not a part of the negotiation but it wants the issue to be resolved for peace at the earliest.

The Government’s stand is that the final solution must not harm Manipur, he added.

In addition, the Government will review the Suspension of Operation (SoO) matter and the militants should be confined at their designated camps, he said.

Regarding education, he informed the House that more than 4000 teachers have been absorbed last year to improve the State’s education system.