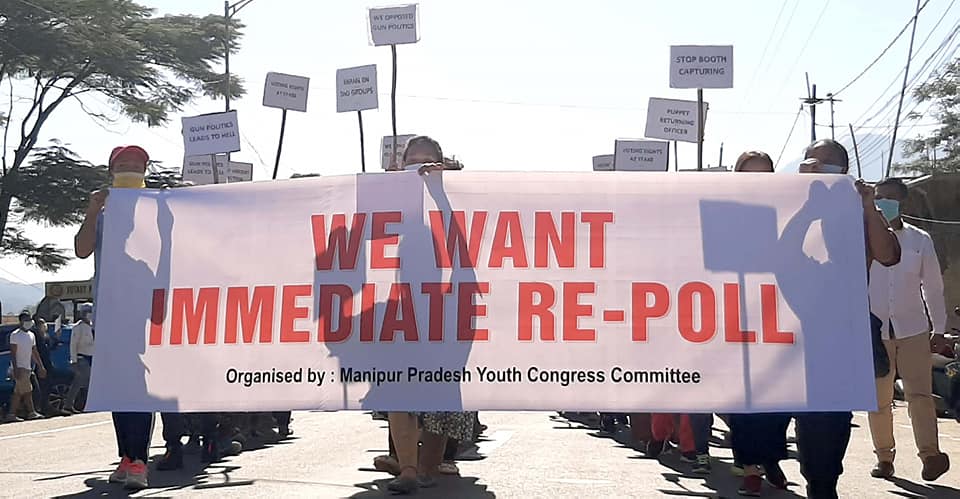 They held banners inscribed with, “We want immediate re-poll”, “Biren Govt.+DGP+KNO/KRA+KNO/KNA+KNO/USRA vs one Little Boy”, etc. apart from placards which read “Our electoral rights at stake”, “Our future at stake”, “Shame on BJP led Govt.”, “Shame on SoO groups”, “We oppose threatening, am I next?”, “We oppose gun politics”, “Gun politics lead to Hell”, “Stop booth capturing”, “Puppet Returning Officer”, etc. during the rally organized by Manipur Pradesh Youth Congress Committee.

The rally began from Brig. M. Thomas Ground and ended at DC office gate with the congregation shouting slogans such as, “We want immediate re-poll”, “BJP Govt.- down, down”, “Returning Officer-Down, Down”, “Assam Rifles-bodyguard of UGs”, “Commandos-bodyguard of UGs”, etc.

Inside the DEO/DC office chamber, the INC Candidate accompanied by his Chief Agent and General Secretary including few other supporters met the Returning Officer and produced a video clip of the Returning Officer receiving the INC complaint letter submitted yesterday to the media but the RO blatantly denied that he is not aware of it.

The RO said that as per the guideline he had verified the registered number of voters, accounts of votes, presiding officers dairy and any other complaints received from the sector officers and he has already recommended for no re-poll. It is now up to the Election Commission to decided what to do, the RO said. However, the INC candidate objected the presiding officers’ report of various polling stations by producing the voters slips of the INC supporters who were denied their franchise rights on the polling day and as per instructed by the Returning Officer we have submit a written complaints which he received yesterday but blatantly denied today that I have not received any written complaint despite of producing the video clip of him receiving our written complaint letter.

Speaking to media persons within the campus of DEO/DC office after meeting the Returning Officer, INC Candidate Dr. Lamtinthang Haokip said that despite an earnest appeal to the Returning Officer, 51-Saitu (ST) AC, Subinson Sapam, he outrightly rejected his plea since he acted on behalf and under instruction of BJP’s Manipur Chief Minister N. Biren Singh forfeiting his constitutional duties and responsibilities as public servant. He continued that the RO acted in such manner fearing that all the video footages in the polling day will certainly reveal all the unconstitutional and undemocratic activities inside the polling stations/booths such as selected few voters under the instruction of KNO/KRA, KNO/KNA, KNO/USRA who are under SoO with state and central Government along with some intimidated village chiefs or authority who acted on behalf of the said UGs while pointing out that no voters who support the INC candidate were allowed to enter the polling booths to franchise their rights.

Lamtinthang Haokip also said that it is a grave concerned for the citizens of Manipur that BJP candidate of Saitu AC, Ngamthang Haokip personally made a statement in local dialect which went viral in social media that under the instruction of his boss Chief Minister N. Biren Singh, he got the full support of the aforementioned UGs and declared that people who vote for INC will be considered as anti-BJP Government in the state and central.“We are against the schedule vote counting tomorrow until all video footages in all the polling booths are provided to us and if the vote counting still not reschedule and re-poll is held as demanded we will take legal action and law will take its own course of action”, asserted the INC candidate while cautioning that they will not spare anyone including the Government indulging in the unconstitutional and undemocratic act in the bye-election. He also said that Election Commission of India must act immediately and take cognizance of the matter seriously and take immediate action against the BJP candidate and his cohorts while adding that the Returning Officer of 51-Saitu (ST) AC must be terminated immediately for acting on behalf of the BJP candidate and BJP Government of Manipur. The INC candidate also appealed the people of Manipur and all the right thinking citizens and people of Saitu AC in particular to strongly condemned such unconstitutional and undemocratic electoral process carried out by the Chief Minister and his cohorts.

One thought on “Manipur By-Polls: Rally at Kangpokpi demanding re-poll”