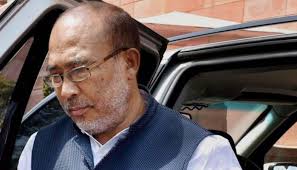 Imphal, December 24 2020: The residents of Kontha Ahallup locality under Heingang Assembly Constituency have urged the Manipur Chief Minister to take actions against the alleged drug peddler and history sheeter Wahengbam Ramananda alias Rousow who has been repeatedly arrested for selling drugs.

However, the continuous activities of one Wahengbam Ramananda alias Rosho aged 45 years and his wife Wahengbam Pyari aged 38 years has made most of the youths in the locality to become drug users and addicts.

Secretary further mentioned that Ramananda has been caught repeatedly for selling drugs but released after giving strict warnings. The drug peddler was even ostracised from the locality once but was allowed to stay in the locality again on humanitarian grounds.

While conducting an anti drug drive yesterday, the local clubs and meira paibis caught a couple from Sangakpham along with drugs and they disclosed that they procured the drugs from W Ramananda and his wife.

Wahengbam Ramananda alias Rousow has been caught for selling drugs for the fourth time this year, firstly on March 4 and thereafter on May 20 and August 20 and on December 23.

Yesterday’s case was reported to Heingang Police and a police team came and searched their house and Ramananda and his wife were arrested by the police.

Secretary also said that since the drug is easily available, the youths of the locality have become drug addicts and sought the Chief Minister’s intervention and the co-operation of other organisations of the State fighting against drug abuse to award befitting punishment to such drug peddlers in order to protect the future generation from the clutch of drugs.

According to reports, Wahengbam Ramananda alias Luwangngamba alias Rousow was detained in the past under National Security Act,1980. He is alleged to be a member of underground militant organizations.

In September 1994, he joined underground militant group UNLF received military training. In the year 2003, he joined KCP-Lallumba group. He was arrested on multiple occasions but released on bail plea(s).

He is also believed to be involved in gruesome incident of cooking human flesh and served his fellow cadres of KCP(Lallumba).