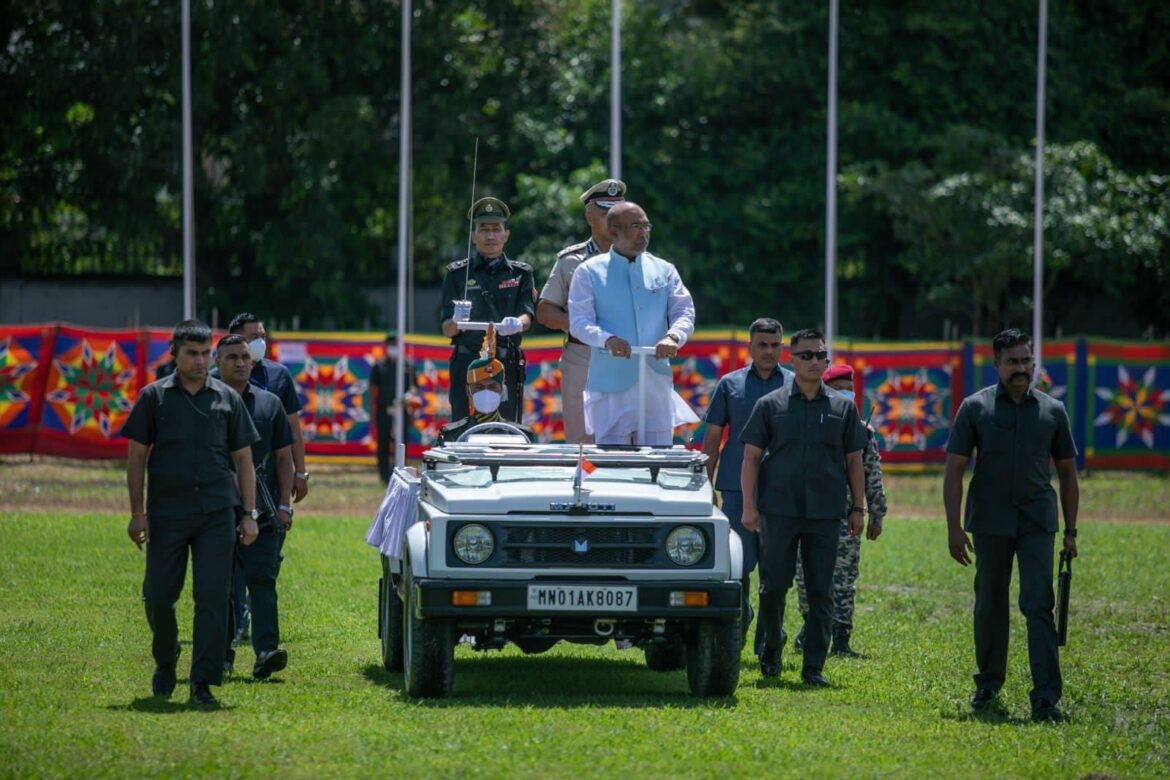 Imphal, August 16 2022: Manipur Government will set up new police outposts at all districts located along the international border and also along Imphal-Jiribam National Highway.

Manipur Chief Minister N Biren announced that 34 police outposts at all districts located along the international border and also along Imphal-Jiribam National Highway will be set up. He was speaking at the 76th Independence Day celebration at 1st Battalion Manipur Rifles Parade Ground yesterday.

On the occasion, N Biren Singh extended his best wishes to the people of the State and added that India had been celebrating its Independence Day every year on 15th August since 1947 .

However, with the completion of 75 years of India’s Independence this year, the whole country is celebrating the occasion as Azadi Ka Amrit Mahotsav with more fervor, he stated.

The Chief Minister continued that the National flag has also been hoisted across the state from 13-15th August as a part of the Azadi Ka Amrit Mahotsav celebration which was launched on March 12, 2021 .

Stressing on the initiatives and developmental works taken up by the government, N Biren informed that the State Government has initiated due process of setting up of 34 new police outposts in all districts located along the international border and also along Imphal-Jiribam National Highway.

He continued that drugs amounting to around Rs.3,212 crore in international markets were seized under War on Drugs 1.0, apart from arresting 2,104 persons in drug related cases and destroying 14,000 acres of poppy plantations.

In the War on Drugs 2.0, drugs amounting to Rs 818 crore were seized and poppy plantations over 531 acres of land destroyed, he added.

Apart from this, to ensure transparency in recruitment of Class III and IV posts of the State Government, the State Legislative Assembly had passed the Manipur Staff Selection Commission Bill 2022 recently, the Chief Minister said.

He also stated that the State Government had increased the budget allocation for Startup Scheme from Rs 30 crore to Rs.100 crore.

N Biren continued that the Centre for Invention Innovation and Incubation Training had also been established under PPP model while District Youth Skilling, Entrepreneurship and Employment Centres had been set up in all district headquarters.

N Biren informed that the Government had taken up measures to improve various roads under the 100 Days Action Plan. The Central Government had accorded approval for Rigid Pavement of roads within Imphal City. The project would be taken up under externally aided project of Asian Infrastructure Investment Bank, he added.

He continued that the Imphal Ring Road project would also be started soon under the funding of Asian Development Bank.

On the Agnipath scheme, he expressed satisfaction that youths of the State would now be able to participate in the Agniveer recruitment rally in the State itself at Leimakhong.

He thanked the Marangching village authority, personnel of Territorial Army, NDRF, SDRF and other armed forces for their service in rescue operations conducted after the tragic landslide which struck Noney.

He also expressed thankfulness to all the people of the Manipur for their continuous support to every initiative taken up by the State Government for the development of the State.

Heisnam Laxmi, W/SI of Bishnupur District and M Priyadarshini Devi, W/SI of 9th IRB were presented with the Union Home Minister’s Medal for Excellence in Police Investigation for 2018 and 2021 respectively.

For team Category, the award was presented to the Department of Information Technology.

Chief Minister’s Certificate of Recognition for 2022 was presented to the joint team which conducted a search and rescue operations in the aftermath of the Noney landslide, all Personnel of Police department for their effort and devotion to duty in ensuring a bandh and blockade free Manipur, teams of doctors, nurses and staff of Jawaharlal Nehru Institute of Medical Sciences for conducting kidney transplant in a Government Hospital and staff of the Chief Minister’s Secretariat.

Chief Minister’s Certificate for Specials Recognition was presented to the team of District Administration, Jiribam for their remarkable achievement in vaccinating all eligible persons of the district with at least one dose of COVID vaccine within a short period of time.

,As a part of the celebration, the Chief Minister hoisted the National flag with Rashtriya Salute and also inspected the parade at the venue.

Simultaneous hoisting of National flags at the perimeter of 1st Manipur Rifles Parade Ground by personnel of the Police department and performances by cultural troupes were also the highlight of the celebration at 1 st MR Parade Ground.

After the celebration at the 1st Manipur Rifles Parade Ground, the Chief Minister visited the Haipau Jadonang Park at Keishampat and Rani Gaidinliu Park at Mantripukhri and led other dignitaries in offering floral tributes to the two freedom fighters.

Later, the Chief Minister attended a programme at Hapta Kangjeibung in connection with the celebration of the 76th Independence Day.

The Chief Minister along with other dignitaries also offered floral tributes to freedom fighters.

As a part of the celebration, N Biren Singh and Youth Affairs and Sports Minister Govindas Konthoujam felicitated athletes of the State who represented the country at the recently concluded Commonwealth Games.

Cultural troops, students and artistes also performed at the ceremony.

Cultural dances of different communities including Kabui Dance, Maring War Dance and Kuki Dance were performed at the ceremony.

Performances by the Rhythms of Manipur, school students and group performances by different communities and Thang-ta groups were other highlights of the ceremony.

The ceremony was attended by Ministers, MLAs, officials, students and the public from different parts of the State.